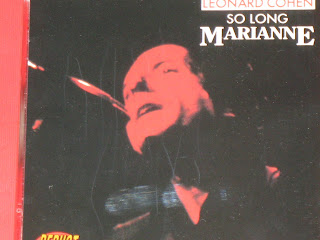 Leonard Cohen's So Long, Marianne is really just another version of the 1975 release, The Best Of. Released in 1992 by Columbia, this album, like The Best Of, contains twelve songs. Most of the songs here are those included on The Best Of, but arranged in a different order.

This album opens with "Who By Fire," from 1974's New Skin For The Old Ceremony. The second song is "So Long, Marianne," which was originally released on Leonard Cohen's first album, Songs Of Leonard Cohen.

Album Features Four Songs Not Included On "The Best Of"

This album has four songs that were not included on The Best Of. Interestingly, though this album was released years later, the extra songs are still songs from Leonard Cohen's first four albums, just as all of the songs from The Best Of were.

The four differences are "Lover Lover Lover," "Winter Lady," Tonight Will Be Fine" and "Diamonds In The Mine." For those who are curious, these songs replaced "Hey, That's No Way To Say Goodbye," "Famous Blue Raincoat," "Last Year's Man" and "Take This Longing."

The first deviation from the 1975 release is the song "Lover Lover Lover," which was originally released on New Skin For The Old Ceremony (1974). This is a song that Leonard Cohen did perform during a brief leg of his 2008-2009 tour, making the fans who made it to those shows very happy.

There is a live version of "Lover Lover Lover" on Field Commander Cohen (2001).

"Winter Lady" And "Tonight Will Be Fine"

"Diamonds In The Mine"

This album ends with the lively "Diamonds In The Mine," which was originally released on Songs Of Love And Hate (1970). A live version of this song is included on Live At The Isle Of Wight 1970 (2009).

This album was released in 1992, the same year that saw the release of Leonard Cohen's "The Future." He was enjoying a new popularity at that time, due in part to his music being used in several films, including Pump Up The Volume (1990).

There is a question of whether this album is considered an official release. Leonard Cohen does not include it in the list of albums on the official web page. Also, it seems that So Long, Marianne was released with a different cover in 1989.

Posted by Michael Doherty at 11:16 PM