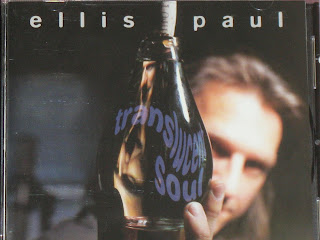 Ellis Paul is one of the best songwriters, and his voice is so powerful and so full of emotion. This album includes "Seven" and "Angel In Manhattan."

Ellis Paul is one of the best songwriters performing these days. He started doing concerts back in early 1989 in Massachusetts (his first gig was opening for Roger McGuinn at the Old Vienna). He was a member of the group End Construction (along with Brian Doser, Jim Infantino and Jon Svetkey). And now he tours extensively all over the United States, playing to enthusiastic crowds who go back again and again to see him. This CD will give listeners a taste of what this incredible singer/songwriter is about.

Ellis Paul begins this album with "Take Me Down," which is a beautiful song. It highlights the familiarity of his voice. Even for those who have never heard him before, there is something friendly and honest and inviting about his voice. And it's that element that really makes a song like "Take Me Down" work so well. And of course the lyrics are wonderful: "I'm a one-man line at the twenty-four hour store/I'm in a town that reminds me of my home town streets/I roamed the aisles a thousand miles from what I was looking for/A familiar face that would smile at me sweetly." This is an excellent version of the song.

"I'm The One To Save" is a somewhat unusual song for Ellis Paul. Its feel, its mood is different, though some of the images are familiar to fans of his music - this song mentions angels, for example. The chorus is "Hey, hey/I'm drowning/Hey, hey/Wave by wave/Hey, hey/Heart pounding/Hey, hey/I'm the one to save."

"Seven" is an amazing and powerful song. The lyrics start, "Seven times I traced your number/Just one finger to your voice/Seven times I put the receiver down/Seven times I tried to write you/But I cannot make your choice/Your lips they move/But they make no sound." And his voice is so moving when he sings, "I'm letting go 'cause holdin' on is killing me/My timing can be criminally slow."

"Live In The Now"

Ellis Paul is a big Beatles fan. He's covered some Beatles songs over the years (such as "Let It Be"), and made references to them in several songs. (And even the writing on the cover of this album is slightly reminiscent of Rubber Soul.) In "Live In The Now," he quotes John Lennon. And then at the end of the song, he sings a bit of "She Loves You."

"The World Ain't Slowin' Down"

"The World Ain't Slowin' Down" is one of those songs that just makes people feel good. It's a wonderful song, with a positive feel and attitude, as well as great lyrics. Ellis Paul sings, "And I get the sensation/It's joy and frustration/Like getting caught by a tropical rain/Freedom can numb you/When there's no place to run to." "The World Ain't Slowin' Down" was featured in the film Me, Myself & Irene (2000), and is still a regular part of Ellis Paul's live performances. Duke Levine plays electric guitar on this song.

"Angel In Manhattan" is one of the best songs Ellis Paul ever wrote. The story about the transvestite on the giant tricycle is well known by now (for those who don't know it, it's included in a live performance of the song on A Summer Night In Georgia). The song itself is wonderful and uplifting. It begins, "Tell the man who repairs the wings for angels/That one has fallen among the mortals on Bleecker Street/I lent a hand, she looked up at the steeples/As if to blame them for the pavement beneath her feet."

Dar Williams does the backing vocals on "Angel In Manhattan."

Yes, admittedly "Translucent Soul" is a message song. But it's a wonderful song that celebrates Ellis Paul's friendship with Vance Gilbert. (For those who don't know, Vance Gilbert is a pretty damn good singer/songwriter himself.) Ellis Paul sings, "Embrace what you have in common/celebrate what sets you apart/It takes more than the color/that you find on a palate/to turn humanity into an art."


Translucent Soul was released on Philo on September 15, 1998. Ellis Paul has released several other albums, including Sweet Mistakes (2001) and The Speed Of Trees (2002). His most recent release is the incredible The Day After Everything Changed (2010).
Posted by Michael Doherty at 7:08 PM