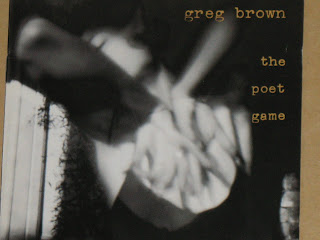 The Poet Game is another great selection of twelve songs from singer/songwriter Greg Brown.

Is there anything greater than Greg Brown's voice? His voice is like this very cool, very comforting friend speaking right into your ear to your brain. His songs are often misleadingly simple. But there is so much there, so much to hold onto.

This album opens with "Brand New '64 Dodge," a song that takes place in November 1963. Sure, a lot of songs, stories, books, films have taken place at this familiar time. But its very familiarity is what makes this song work, even for those who weren't alive at that time.

The lyrics include this verse: "She's got short red hair and blue eyes/and her swimsuit's also blue/and her little brother is retarded/but Jesus loves him, too/And Jesus loves our president/even though he is a Catholic./There's a lot for a boy to think about/as he walks along the railroad tracks."

"The Poet Game," the title track, is one of the best on this album. This is the type of song that Greg Brown does so well - something sad and warm. Something reaching from the past toward the listener, as the listener strains to reach back to that time. Meeting somewhere in the middle is what Greg Brown is able to do, able to make listeners do.

The lyrics include this: "I miss him every time I say his name/I don't know what he's doing/or why our friendship died/while we played the poet game."

"Ballingall Hotel" is unabashed blues, but the lyrics are better than most simple blues songs. This song is about a couple who have sworn never to return to each other, but of course do, because their other plans for their lives didn't pan out right.

How could someone not totally fall for "Jesus & Elvis" when it opens with the lines, "Jesus had some water, said 'Wine'd be better yet.'/Elvis picked up a guitar and made all the women wet"? This is the kind of gospel song everyone can get behind.

The next song, "Sadness," opens with the great lines, "Sadness come to my house/with a stinking bouquet, smiled with her thin gray lips/and said, 'Honey, I'm home to stay.'" During the chorus, his quavering voice is almost a yodel as he sings, "Go away and leave me alone."

Greg Brown composed all the lyrics and music for this album. Besides doing the vocals, Greg also plays guitar on the album. The musicians joining him for this release include Bo Ramsey on electric guitar, Gordy Johnson on bass, Rob Arthur on Hammond B-3 organ, Steve Hayes on drums and Robin Anders on percussion. Jesse Wheeler plays drums on "Lately." Prudence Johnson performs backing vocals on "Driftless."

Posted by Michael Doherty at 5:30 PM