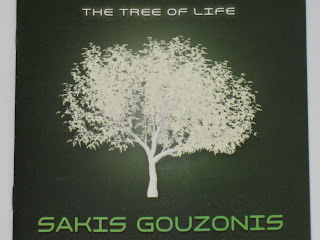 The Tree Of Life is the third album released by Greek electronic composer Sakis Gouzonis. All tracks are instrumentals. One thing I love about this CD is that it causes my brain to think in images rather than words as I listen. That doesn't happen to me that often. It's not simply the lack of lyrics that causes that, but the vibrant and evocative tones that Sakis chooses. He is able to create a living, visual landscape through his music, which seems rare for electronica.

Another thing that sets this CD apart from a lot of other electronica is that no track drones on. In fact, a couple of the tracks seem to end too soon. This is not mindless club music, where one track could easily substitute for another. Each song is distinct and has its own story to tell, its own emotions to evoke.

The Tree Of Life opens with "Seed Of Hope." "Seed Of Hope" is electronica, but with almost a New Age bent, like if Windham Hill had gone more fully along the electronica route. It's not really club music, though it has a good beat. This is music to take you out of your body, to lift you away from mundane concerns and make your mind go off into some other realm.

"Two Worlds United" has more of a pop feel, but like 1980s pop (which of course is the best kind). It's the rhythmic keyboard part that adds that element.

"To See Your Face"

I've always said I can do without rain sound effects in songs (I even dislike it in "Riders On The Storm"). But then again, I own one of those rain sticks. So what am I talking about? Anyway, the rain-like sound is only at the beginning of this track. And then "To See Your Face" moves into its main section, which has a truly pretty sound. How often do you think of electronica as being passionate? But this love song has a definite passion to it.

"From The Four Winds"

When "From The Four Winds" starts, the keyboard fades in, like a twisted carnival ride operator approaching you atop a mechanical beast of his own creation. And the whole track reminds me of some dream-like funhouse or ride. Fellini would enjoy this one. And it's one of my personal favorite tracks. The song pulls you along, like it has you on its own ride. This is one that ends too soon.

"With Respectful Hearts" reminds me of some mid-1980s film soundtracks. Where there is a love story, and a character is learning a valuable life lesson. And there is some mild danger from a villain played by James Spader. If you infer from that that I dislike the track, you're wrong. It's totally enjoyable. It's just that it has this weird nostalgic sound for me.

The steady beat of "Sweet Joy" makes this one closer to a dance tune. But there is more going on in this song than a simple dance rhythm. There is a beauty to this track, and a positive vibe. Sakis is really able to build something wonderful from a simple pop rhythm. This is one of my favorite tracks.

"An Endless Love" is definitely more in the dance pop vein, even with a repeated cheesy synthesized percussive sound effect. It calls to mind the last dance at a prom, with lights flashing on the heroes of a love story as they finally come together for a joyous spin around the floor.

"Holy Cure" works on a completely different level, like an erratic heart beat thumping below the soaring tones on the keyboard.

"The Source Of Light"

The album concludes with "The Source Of Light," another wonderful track to pull you out of your own head and into the sky. Like walking on a ray of light, or being pulled through clouds - without fear, without danger. It's like a slow, swaying dance in orbit. This is another of the CD's best tracks.