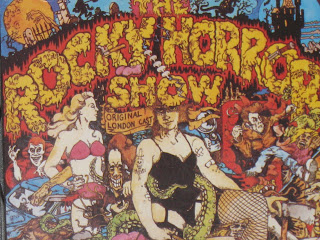 This CD contains the very first versions of those Rocky Horror songs folks have come to love, and includes Brad's solo, "Once In A While."

This album captures that first bit of excitement over this play. It has a rawer, more immediate feel than the film soundtrack. When this was recorded, the play was new. It was running in a tiny theatre - only 50 seats.

A lot of this original cast went on to star in the film. On this recording, Tim Curry plays Frank-n-Furter, Richard O'Brien plays Riff Raff, Patricia Quinn plays Magenta (and the Usherette), and Little Nell plays Columbia. They would all reprise their roles in the film version. Also on this album is Jonathan Adams as Narrator. In the film version, he would take on the role of Dr. Everett Scott.

Joining them on this recording are Christopher Malcolm as Brad Majors, Belinda Sinclair as Janet Weiss, Rayner Bourton as Rocky Horror and Paddy O'Hagan as Eddie and Dr. Everett Scott.
Christopher Malcolm would have a role in the Rocky Horror sequel, Shock Treatment. (He is also known for his roles in The Empire Strikes Back and Absolutely Fabulous.)

Several of the tracks start with narration from the play.

"Science Fiction - Double Feature"
The album opens with "Science Fiction - Double Feature," this time sung by the Usherette, played by Patricia Quinn. In the film, it's sung by Richard O'Brien (though it's Patricia Quinn's lips that are on the screen). Patricia sings this one with a great Betty Boop-type voice. It's totally fun, and sets the tone for the show with its style and references to 1950s science fiction horror b-films.

"Over At The Frankenstein Place"

"Over At The Frankenstein Place" begins with the Narrator saying, "It seemed a fairly ordinary night when Brad Majors and his fiance, Janet Weiss, left Denton to visit their friend, a Dr. Everett Scott. But it was to a be a night out they were to remember for a very long time."

This version contains Brad's verse, which was cut from the film version. Brad sings, "I can see the flag fly/I can see the rain/Just the same, there has got to be/Something better here for you and me."

"Sweet Transvestite" begins with a bit of narration: "A flat tire and a wet night had brought Brad and Janet to a house that made both of them feel apprehensive and uneasy. But if they were to reach their destination that night, they would have to take advantage of whatever help was offered."

In the play, "Sweet Transvestite" preceded "The Time Warp." The songs were flipped for the film. Tim Curry is simply magnificent on this one, especially with his added lines, like "Didn't you, freaky?" to Riff Raff after the line "He thought you were the candy man." He also adds a great stutter on "t-t-t-tension." There is no pause in the word "anticipation."

"Time Warp" is the one everyone knows. And this is the version that started it all. It has the power and energy and fun that people would expect. It's perfect.

"Sword Of Damocles" is one of the CD's best tracks. While on the movie soundtrack, it's a relatively forgettable track, here it's a stand-out. It has more of a rock and roll oldie feel. It includes an interesting intro with some of Tim Curry's dialogue.

It also features a Tim Curry section that's not in the film version. Tim sings, "Rocky Horror, you need peace of mind/I want to tell you that you're doing fine/You're the produce of another time/So feeling low, well, that's no crime."

"Touch-A-Touch-A-Touch-A-Touch Me" begins with some dialogue from Narrator: "There are some who say that life is an illusion and reality as we know it is merely a figment of our imaginations. But Janet's emotions would not allow her to indulge in metaphysical argument. It was Rocky who was here, and now."

This version is also special for it includes a reprise of "Hot Patootie" sung simultaneously with Janet's chorus.

"Once In A While"

"Once In A While" is a song that was cut from the film, and so from the film's soundtrack as well. It's Brad's solo. (It is included as a special feature on the DVD release of the film.)

"Rose Tint My World" begins with some of Narrator's lines: "And so fate, it seems, had decided that Brad and Janet should keep that appointment with their friend, Dr. Everett Scott. But what further indignities were they to be subjected to? One thing was clear: it was to be no picnic."

This rendition has a looser, cooler rhythm and pace than the version in the film. This version is superior. And Rayner Bourton as Rocky Horror sounds like Lou Reed in his section of the song. This is the song that contains the play's theme: "Don't dream it - be it."


This record was originally released in 1973. There are several other Rocky Horror Show cast albums available, as well as the film soundtrack, Sing It! (which is the original motion picture soundtrack without the lead vocals) and the Shock Treatment soundtrack.

The Rocky Horror Picture Show was released in 1975. Shock Treatment came out in 1981.
Posted by Michael Doherty at 2:43 PM