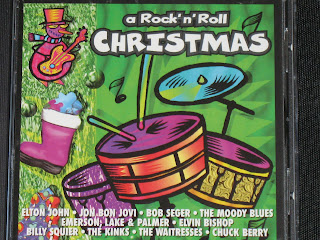 A Rock 'N' Roll Christmas is actually a really good Christmas rock compilation. It contains only two truly weak songs, and oddly, they're the first two tracks. Why start off with two bad songs? Who knows? But there is a lot on this compilation to make it worth owning, especially for those folks who are tired of the traditional Christmas tunes, or who want to augment their holiday music collection with a few tunes that are more fun.

The album opens with Elton John's "Step Into Christmas." Elton John has recorded a lot of great songs over the years. This is not one of them. This is a fairly obnoxious holiday song, but it becomes even more aggravating because it's difficult to shake after hearing it. This song will stick in the listener's head until he is ready to decapitate himself.

And seriously, does anyone want every day to be like Christmas? Sure, you have the day off from work. But think of all the stress, the financial worries, the family obligations. Once a year is more than enough for most people.

Bob Seger And The Last Heard

Long before The Silver Bullet Band (and even before The Bob Seger System), Bob Seger had a band called The Last Heard. And with that band he recorded a Christmas song titled "Sock It To Me Santa."

"Sock It To Me Santa" starts off with some pointless dialogue between a father and son. But once that's out of the way, this song is some good old rock and roll. It freely borrows from James Brown's "Papa's Got A Brand New Bag."

A lot of versions of "What Child Is This?" are instrumentals, and they are truly pretty. The Moody Blues include the lyrics, and that may be a mistake. The short instrumental section of this song is nice, but the lyrics are so off-putting for those who aren't true believers. Here is a taste: "What child is this, who, laid to rest/On Mary's lap, is sleeping?/Whom angels greet with anthems sweet/While shepherds watch are keeping/This, this is Christ the King/Whom shepherds guard and angels sing/Haste, haste to bring him laud/The babe, the son of Mary."

And The Moody Blues don't really do anything interesting with this song.

George Thorogood's "Rock And Roll Christmas" is another good old rock and roll song, but again, it starts off with a pointless spoken word section. There is this bit of dialogue, "Hey man, what are you doing?/Hey man, how are you doing, man?/I'm doing good, man. What are you doing?/I'm getting ready for Christmas, man."

But when that's finished, the rest of the song is fun, and there is some nice work on saxophone. George Thorogood wrote this one. (It does borrow a bit from the Ramones' "Rockaway Beach.") This song also contains a little tease of "Joy To The World."

Emerson, Lake & Palmer's contribution, "I Believe In Father Christmas," is by far the most beautiful song on this compilation, though it's about the loss of innocence. It was written by Greg Lake and Peter Sinfield.

This song features some excellent lyrics, including these lines: "They sold me a dream of Christmas/They sold me a silent night/They told me a fairy story/'Til I believed in the Israelite/And I believed in Father Christmas/And I looked to the sky with excited eyes/When I woke with a yawn in the first light of dawn/And I saw him and through his disguise."

Is it possible to turn "Silent Night" into a rock song and make it work? Absolutely. Elvin Bishop's version is seriously good, and it does have a bit of a gospel flavor to it. Great work on piano and excellent backing vocals make this rendition even better.

"Christmas Wrapping" by The Waitresses is absolutely one of the best Christmas songs ever written (I would say second only to The Pogues' "Fairytale Of New York"). It's totally fun, it has a great rhythm, and it has a sweet and happy ending. And this is the band that had a hit with "I Know What Boys Like." Just try listening to "Christmas Wrapping" without dancing around and without a smile on your face - it's impossible.

Who knew Billy Squier could write such a beautiful holiday tune? Seriously, "Christmas Is The Time To Say I Love You" is wonderful. It has a good beat, and a ton of heart. And Billy Squier's voice is just amazing - he really has a unique voice, and he puts it to excellent use on this song.

"Christmas Is The Time To Say I Love You" was originally released as the flip side of his 1981 single, "My Kinda Lover."

Chuck Berry's take on "Merry Christmas Baby" is good. It has the right bluesy feel, and some wonderful work on piano. It's not quite as sexy as James Brown's rendition, but it still has a lot going for it. One interesting thing about Chuck Berry's version is that it contains a nod to "White Christmas" approximately a minute and forty-five seconds in.

This compilation concludes with "Father Christmas" by The Kinks. "Father Christmas" is one of the best Christmas rock songs. For those who are unfamiliar with this Christmas tune, here are some of the lyrics: "Father Christmas, give us some money/Don't mess around with your silly toys/We'll beat you up if you don't hand it over/We want your bread, so don't make us annoyed/Give all the toys to the little rich boys."

The first line is, "When I was small I believed in Santa Claus, though I knew it was my dad." "Father Christmas" was written by Ray Davies. It was originally released as a single, and then included on the 1986 double album Come Dancing With The Kinks.

CD Track List
This CD was released in 1994 through PolyGram Records.
Posted by Michael Doherty at 2:24 PM