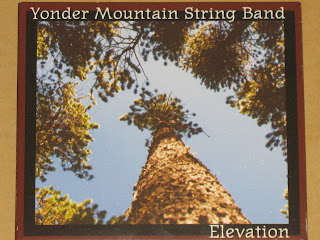 Elevation is the band's debut album, and it contains a lot of wonderful original bluegrass music.

Yonder Mountain String Band is a bluegrass band based in Colorado. Sure, they may not be pure bluegrass. They use bluegrass music as a base from which they feel free to explore other musical territory. Yes, they're a jam band, with rock influences, and they're one of the best bands on the scene these days.

Bluegrass fans will not be disappointed. Jam band fans will be delighted. These four musicians are masters of their instruments, and their vocals blend together perfectly. Besides that, they also write some damn good material, as this album clearly demonstrates.

The album opens with "Half Moon Rising," which is just a beautiful, sweet song. It was written by Jeff Austin, and includes this line: "There's a still at dawn like the sound of your love's breath as she lies sleeping."

"Mental Breakdown" is one of those wonderful, quick bluegrass instrumentals. This was written by Dave Johnston.

"The Bolton Stretch" is a song about a man wanted for robbery, a man the sheriff can't catch as he races along the Bolton Stretch. It's an excellent song, written by Ben Kaufmann.

"He didn't come for justice/didn't come to make ammends/He doesn't ask forgiveness/he's not looking to make friends/It's just that he was passing through/with money wearing thin."

"Left Me In A Hole" is just a damn cool song. The vocals sound so great. It was written by Adam Aijala. Here is a taste of the lyrics: "The phone it rings, who could it be, it ain't her, it's not for me/Forgetting's easy as one, two, three, my friends say."

There is a really nice concert recording of this song on the second disc of Mountain Tracks: Volume 3.

"On The Run" is a full-steam-ahead song. It's another about running from the law, and is one of the best songs on the album. The instrumental section is phenomenal. It was written by Ben Kaufmann.

"Eight Cylinders" is one of the sweetest-sounding songs ever. It's just a total joy to listen to. Sad and pretty, it was written by Dave Johnston. Here is a taste of the lyrics: "Because your songs are so sad and tired/Because hunger is a darkness inside the phone wire/It always has been, it always will be/So it seems to me/That's the price you pay when you say/I will be behind you."

"Mossy Cow" is a fun, playful, whimsical instrumental track. This is a song that shows how closely bluegrass is related to Irish folk music. It's a wonderful song, written by Adam Aijala. Darol Anger plays fiddle on this track.

"If There's Still Ramblin' In The Rambler (Let Him Go)"

This song is great fun. In concert, they often break it up; after the line about "just one more Jagermeister shot," they'll go into another song, and then eventually get back to the end of "Rambler." But here it is, all together. This song was written by Jeff Austin. (There is a live version of this song on Mountain Tracks: Volume 3.)

This song starts with a very cool groove, and then quickly speeds up. It's a great instrumental, written by Adam Aijala, who also plays banjo on this track. Darol Anger plays fiddle, and Mike Marshall plays mandolin.

In 2008, they played at the Democratic National Convention in Denver.

Elevation is their first album, released on Frog Pad Records in 1999. It was produced by Sally Van Meter.

Posted by Michael Doherty at 2:17 PM