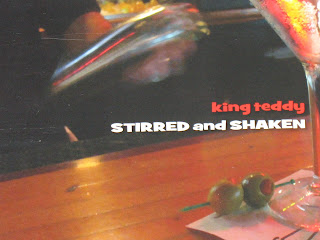 The debut album from King Teddy is country swing, early rock and roll, and rockabilly, with the humor, energy and joy of those genres.

Sure, at times it gets a bit cheesy for my often-cynical ears (particularly on songs like "This Signpost Leads To Love" and "Say Something"). But really, that's part of its charm. It's refreshing, and there is something admirable about writing an unabashed love song or happy tune without a hint of pessimism. Maybe this is exactly what we need. Maybe things will go well if we can embrace this attitude. But either way, certainly life is good when we're on the dance floor, and this album will get you moving.

With one exception, these songs are all originals. However, if I'd been told that the bulk of this material was written in the 1950s, I wouldn't have doubted it. These songs have the heart of early rock and roll. They've really captured the delight of that music.

Stirred And Shaken opens with "I Don't Mind." This is fun country swing, with some silly touches - like the bell on the line, "No one rings my bell" and the kick drum as heartbeat on the line "Gives my heart something to do." The horn gives it a bit of an early rock and roll feel. The saxophone solo by Chris Watling really sends you back to the 1950s - the fun, loose, easy 1950s, not the 1950s of McCarthy and the Red Scare. "I Don't Mind" was written by Mike Sottong. And I really like the line, "You can't lose if first you quit."

"That Ain't Right" really feels like some great early rock and roll. It starts with guitar, then the other instruments kick in before the vocals. The horn is truly delicious, and the piano is wonderful on this one. "That Ain't Right" is one of my favorite tracks. It's just so much fun. It feels pure and spontaneous. It thrives on the best elements of early rock and roll as well as rockabilly - that natural and real feel. No airs, no pretension. And it also has a sense of humor, heard in lines like, "I wish that I could make her mine but she won't even look at me/And that ain't right." "That Ain't Right" was written by Dan Rivizzigno.

"Intoxicated" has a cool slow swing rhythm. It borders on jazz, and features some great vocals. And from this song comes the album's title, in the line, "She leaves me stirred and shaken too." Al Williams plays soprano sax on this track, and his solo is one of the song's highlights.

The vocals in "Tina" have a bit of a lounge feel, especially as he calls out "Tina, tina, tina." King Teddy is adept at mixing styles, for there are still moments of rock and roll in this one. Moe Nelson plays ukulele on this track.

"All Along" is another fun tune, this one clearly influenced by the vocal groups of the early 1960s, especially with the backing vocals. The lead vocals are also particularly good on this track. Written by Mike Sottong, this song features lyrics like, "Why I never did tell you so, well, I couldn't say why/Do I breathe every breath as if I knew how lonely I would be/I do, but I did all along."

"Buzz Buzz Buzz And Tweedlee Dee" is more pure fun. This rockabilly tune is reminiscent at times of some early Elvis Presley stuff. One of the best elements of this song is the backing vocals behind the sax solo, a wonderful touch. I can't help but completely love this song.

Here is a taste of the lyrics (written by Mike Sottong): "You handed me a hat/And said a country song works better for me/Well, I don't know about that/I only buzz buzz buzz and tweedlee dee." Sure, these songs aren't going to give you some brilliant introspective breakthrough - but they will give you a temporary break from needing that sort of thing.

"Another Candle" is mellower tune, a wistful and playful love song. Esther Haynes performs lead vocals on this one. The song is a sort of duet. After the first male vocal part, she comes back in with "Now where were we?" - a delicious moment, as if she weren't even listening to him, and she goes back to her list. The two voices don't come together until the end. It's pretty wonderful, actually.

"Earlysville" has a heavier feel, and as such definitely stands out on this release. This one is a bit more serious in the lyrics. It starts, "For days, I haven't been alive in any meaningful sense of the word/I left behind my heartless crime and now the center lines have blurred/I'm driving east to try to stop the beast before it's ever even born/Better late than never when there's nothing left to mourn." This song has a seriously cool groove. "Earlysville" is one of the best songs on the CD. It was written by Mike Sottong.

"Taking In The View"

"Taking In The View" is another of this CD's highlights. It starts with some wonderful playing on piano, and then the bass leads the other instruments in. There is sparse playing on drums at first, which totally works. As with most of the tracks on this album, "Taking in The View" has a good groove. When the sax takes the lead, the song gets even better. "Taking In The View" was written by Dan Rivizzigno and Mike Sottong.

The album ends with its only cover - a fast swing rendition of The Beatles' "I Will." King Teddy certainly has the vocal talent to tackle a Beatles song.

"I Will" was originally included on The Beatles (more commonly known as The White Album). There is also a bit of a Beatles influence heard at times throughout the album, most noticeably in the vocal line of "When I Have To Say Goodbye," which was written by Dan Rivizzigno. (Again, it's more Paul than John on that one.) (And there is a moment in "Taking In The View" that sounds like a moment in "All You Need Is Love.")

It's interesting to hear a saxophone solo in "I Will." But this band makes it work.

Joining them on this recording are Al Williams on soprano saxophone and tenor saxophone, Eddie Hartness on percussion, Ron Holloway on tenor saxophone, Ray Strucker on trumpet and valve trombone, and Esther Haynes on vocals.

Stirred And Shaken was released on July 20, 2010. The album was nominated for three Wammies (WAMA - Washington Area Music Association): big band/swing recording, debut recording and record design, and it won in the first two categories.
Posted by Michael Doherty at 4:25 PM