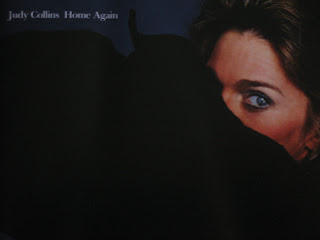 Home Again was Judy Collins' final studio release with Elektra (she did release a live Christmas album a decade later). She contributed two original songs to this album, including the surprising "Shoot First." The album was produced by Dave Grusin and Larry Rosen.

"Only You"
What, a Judy Collins album that opens with something approaching a techno beat? You bet. This song starts like the mid-1980s pop song that it is. But once Judy's voice comes in, this song is separated from other 1980s pop tunes. Judy Collins' voice is so beautiful, so strong, so unmistakable, that this song won't get lost among others of similar instrumentation from the period. And the thing is it's actually a really good pop song, written by Vince Clarke, who was a founding member of Depeche Mode.

"Sweetheart On Parade" was written by Elton John and Gary Osborne. It's a sad tune about a person on the stage who is adored by the crowd, but not by the one person she loves. It features piano and vocals, and the line, "If everybody loves me, where are they tonight?"

"Everybody Works In China"

"Everybody Works In China" is an odd pop song written by Henry Gross, who was a founding member of Sha Na Na. Here is a bit of the lyrics: "The sun is setting, but I'm still in my bed/Taking something for my aching head/I used to run just to get out the lead/But now I just change the channels instead."

"Yellow Kimono" is about a woman who calls her husband who is in Tokyo, with the refrain "She's waiting on Tokyo time." He doesn't answer, so her imagination takes over, attempting to answer the question of what he could be doing, and leaping to the worst conclusions, as imaginations are wont to do.

The song has a surprising electric guitar section which leads to an even more surprising quiet keyboard section. Toward the end of the song, the woman receives a gift in the mail - the promised yellow kimono. This song was written by Graham Lyle.

"From Where I Stand"

"Home Again," the title track, is sung as a duet with T.G. Sheppard, a country music singer. Something in the way T.G. Sheppard sings this song is reminiscent of Neil Diamond's approach to songs. Gerry Coffin, known for co-writing hit songs with Carole King, wrote the lyrics for this song. Michael Masser wrote the music and produced the track. It's the only song on the album not produced by Dave Grusin and Larry Rosen.

"Shoot First" is the first of two songs written by Judy Collins for this album. The song begins with vocals and a marching beat on the snare drum. It then goes into a 1980s dance beat - seriously. And yes, it's catchy. But the lyrics are serious, not mindless '80s pop silliness.

This is a song aimed at the Reagans and the absurd NRA, with lyrics like, "You gotta shoot first/Shoot first.You gotta get them before they get you." Those lines lead into an interesting instrumental section that has both a 1980s pop feel and an Irish folk feel. And then the song ends the way it began. This is one of the best tracks on the album, and one of the most surprising for a Judy Collins record.

"Dream On" is the second of Judy Collins' compositions for this album. It features the line, "If you're a dream, don't let me wake."

"Don't Say Love" is a pop song that could easily be played at '80s nights in dance clubs. Who'd have thought that could be said of Judy Collins song? It was written by Randy Goodrum and Brent Maher, and features lines like, "Don't say love if you don't feel it/Because I'm fool enough to believe it."

The album concludes with "The Best Is Yet To Come," a love song written by Clifford T. Ward and featuring piano and strings.