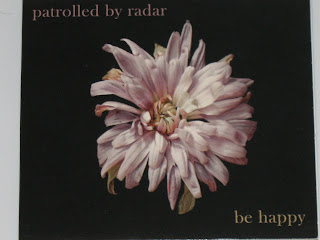 I loved these guys when they were 50 Cent Haircut. The change in names hasn't diminished their appeal at all. Their new album, Be Happy, is full of cool tunes with excellent lyrics. And what a voice. Lead singer Jay Souza at times reminds me of folks like Steve Owen and David Lowery.

The name was apparently changed because people confused the band with the rapper 50 Cent. Uh, who were these people? The rapper never wrote a song half as good as anything this band has performed under either name.

On this release, the band displays its good sense of humor. I have a weakness for stuff that sounds negative, but really isn't because it's sung with a smirk. There are moments that caused me to actually burst out laughing, like the sarcastic-sounding "la la la" moment in "Haywire."

This album has no nonsense. Nothing is overproduced. There are no hidden tracks. Everything is just exactly right. All the songs were written by Jay Souza.

Be Happy opens with "Widow Next Door," a song that sounds like country with an edge. It has a sexy vibe to it. (Think Joe Henry, or even Bob Dylan.) I absolutely love the backing vocals by Annette Summersett.

"New Fight Song" starts off as more of a rock tune, like something by Cracker. The line "So let's all fall in love" is sung with a wonderful cynicism. This song boasts great lyrics including the lines, "my skull was cracked/like a cathedral dome." Then a minute and a half, it breaks down to more of a country tune, with a bit of whistling to boot. And then there is some great stuff on electric guitar when it kicks back in - it comes in with energy and anger.

"Dressed For The Drought"

"Dressed For The Drought" is a great folk song for the poor and depressed. Here is a taste of the lyrics: "we're not impressed/when the truth comes out/we don't care anymore/we don't know where to begin/we're perfectly dressed for the drought." I love the harmonica that comes in near the end. It has that sad, try tone, like a lone man in the desert at dusk, perfectly suited for this song.

"Pachyderm" is country rock with a definite pop influence. It features a short drum solo by Mark Bennington, leading into an excellent lead part by August Poehls on tenor sax. Like all of this album's tracks, there are some excellent lyrics, such as "you are waving at catastrophe/well the same goes for me/we are eager to be/gun shy/one day you'll die."

Though the subject of "Coat Of Disappointment" is actually serious and sad, this song has some funny lyrics, like "i love the drugs/i'm ingesting/how i wish she were here/to disagree." This song has a classic country rhythm, and it reminds me a bit of Steve Owen. The piano section comes as a pleasant surprise. (That's Peter Curry on piano.)

"Coat Of Disappointment" turns out to be kind of a sweet song, with lines like, "i sat and cried last night/before the stone/that bears her name/i planted a flower/in the rain/now i'm waiting/for the sun."

"Fast Life Slow Death" is a seriously cool song. It starts like a slowly bleeding wound. I love the way the music and lyrics are so closely entwined on so many of these songs. What's also great about these songs is that though there is a sense of humor behind them, they will still end up affecting you emotionally. Jay really grabs you when he sings, for example, "here's to my fast life/and my slow death" just before the song picks up a bit. And when he sings, "i'd like to change some things i guess." This is a wonderful song.

"Be Happy," the album's title track, is country folk that kicks in with a bit of country stomp feel. Music that makes you want to drink a cheap beer and then smash the bottle. Should I point out here that Patrolled By Radar shares initials with Pabst Blue Ribbon? (Though does PBR come in bottles, or just cans?)

There is a short (though repeated) section of "Be Happy" with a steady beat that reminds me of "Windy" by The Association. Seriously. Listen to the two songs back to back. You'll hear it.

By the way, I love these lyrics: "i said i love you/for lack of a better word/she said that's the worst lie i've ever heard/then she started to slap me."

The album concludes with "Walking," a groovy bluesy rock number about Hitler and Johnny Cash. I don't think there's anything else I need to say.

Joining them on this release are Peter Curry on drums, bass and piano; Annette Summersett on backing vocals and organ; Krister Axel on organ and accordion, August Poehls on tenor sax, and Austin Hartley-Leonard on cello.

Be Happy is scheduled to be released on June 7, 2011 on Knitting Factory Records. Patrolled By Radar is based in Los Angeles.
Posted by Michael Doherty at 2:35 PM