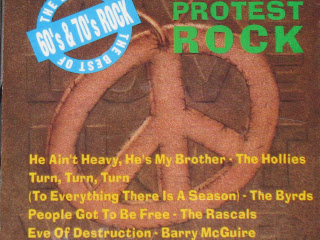 This compilation contains nine great songs from the late 1960s and very early 1970s, including "War" by Edwin Starr.

The album opens with "He Aint Heavy, He's My Brother" by The Hollies. This song was recorded after Graham Nash had left the band (he was at this time in Crosby, Stills & Nash). Elton John plays piano on this song. It was written by Bobby Scott and Bob Russell, and released in 1969.

"Eve Of Destruction" is an incredible song. It's still powerful. Sure, Barry McGuire wasn't a real protest singer. He didn't even write the song. But that doesn't diminish the power of this song, and of his raw vocal talent. The song was written by P.F. Sloan and Steve Barri. P.F. Sloan plays guitar on the track, and Hal Blaine plays drums. The story is that the vocal track was for a rough mix, but that it was leaked to a DJ, who played the song. However, a lot of radio stations banned the song. The line, "Hate your next-door neighbor, but don't forget to say grace" was often heard as "Eat your next-door neighbor, but don't forget to say grace."

"Turn, Turn, Turn (To Everything There Is A Season)"

The words to this famous song are from the Book Of Ecclesiastes (and are also quoted in the film Footloose when Kevin Bacon is trying to convince the town council that the senior class should be allowed to have a dance). Pete Seeger adapted the words and wrote the music for this song. But it is this version by The Byrds that is the most well known.

"I Shall Be Released"

"I Shall Be Released" was written by Bob Dylan. The version included here is by The Band. It was originally released on their 1968 album, Music From Big Pink (the incredible album that also featured "The Weight"). Many artists have covered this song over the years, including Joan Baez and The Jerry Garcia Band.

"People Got To Be Free"

The Rascals are perhaps best known for "Good Lovin'" but this song was also a huge hit for them. It was written by Eddie Brigati (the lead singer) and Felix Cavaliere (who on was keyboards and vocals).

"Get Together" is still a wonderful song, with nice vocals and a nice sentiment (though that was made fun of by Christian Slater's character in Pump Up The Volume). If this song is dated, then it's depressingly so, because people still need this song. But after the attacks on September 11, 2001, this song was one of those listed as "lyrically questionable" by Clear Channel Communications. So clearly it still strikes a chord.

The song has a bit of an odd history. It was written by Dino Valenti of Quicksilver Messenger Service, but he signed away rights to it when he was imprisoned for marijuana possession. Songwriting credit went to Chet Powers, Dino Valenti's real name.

"One Tin Soldier (The Legend Of Billy Jack)"

This version is by Coven, and was recorded for the 1971 film Billy Jack (thus the parenthetical title).

"War" by Edwin Starr
This is one of the best anti-war songs ever written. It's straight-forward, no-nonsense song, with no metaphors. "War, what is it good for? Absolutely nothing." Exactly. He sings, "War can't give life/It can only take it away." Simple, true. This song was also covered by Bruce Springsteen.

"Hurdy Gurdy Man"
This is a beautiful song by Donovan. It was released as a single in 1968, and then as the title track to a full-length album. John Paul Jones (the bass player for Led Zeppelin) plays bass on this track. Some people believe that Jimmy Page and John Bonham also played on this track, and that this song was basically the beginning of Led Zeppelin.

Posted by Michael Doherty at 6:02 PM