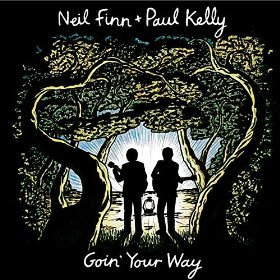 What a complete joy it is to listen to Goin’ Your Way, a two-disc live album from Neil Finn and Paul Kelly, two of the world’s most talented singer/songwriters. You know Neil Finn from his work with Crowded House and Split Enz, as well as for his solo career. And you know Paul Kelly for such great songs as “Dumb Things,” “Before Too Long” and “To Her Door.” This is from a show they did on March 18, 2013 in Sydney, Australia. It was released in late 2013 in Australia and New Zealand, and now, thanks to Omnivore Recordings, the rest of us get a chance to hear it. Here they play some of their best tunes, and are joined by Elroy Finn on drums, acoustic guitar and backing vocals; Dan Kelly on guitar and backing vocals; and Zoe Hauptmann on bass and backing vocals. From what I can gather, there is some re-ordering of songs, and it looks like one tune from the night is missing: Paul Kelly’s “They Thought I Was Asleep.” Also, it feels like some stage banter has been cut, because certain tracks fade out (the applause, not the songs themselves, of course). But the music is absolutely excellent. There are liner notes by both Neil Finn and Paul Kelly, as well as several photos.

The first disc opens with a sweet acoustic rendition of “Don’t Stand So Close To The Window,” written by Paul Kelly and Alexander McGregor, and featuring some nice work on harmonica. “Don’t stand so close to the window/Somebody out there might see/You’re not supposed to be here with me.” This song was originally included on Paul Kelly’s 1987 release Under The Sun. That’s followed by a wonderful version of “Four Seasons In One Day,” written by Neil Finn and Tim Finn, and originally recorded by Crowded House. The line “Smiling as the shit comes down” gets a big laugh from the audience.

The energy increases on “Before Too Long,” a tune from Paul Kelly’s Gossip album. This song has a reference to Hamlet, in the line “Every dog will have his day.” In the first scene of the fifth act, Hamlet says, “The cat will mew and dog will have his day.” And they keep things going with Neil Finn’s “She Will Have Her Way,” a beautiful pop tune from his solo album Try Whistling This. This live version features a cool, extended jam toward the end.

“Not The Girl You Think You Are” is an excellent Crowded House song that was originally recorded for the 1996 compilation Recurring Dreams. I love this gorgeous live version, and it’s one of the first disc’s highlights. And it’s followed by another highlight, Paul Kelly’s “For The Ages,” one of my favorite tracks from his 2012 album Spring And Fall. This is such an excellent song, a sweet love song that makes me smile every time I hear it. And on this version they get the audience singing along. From Spring And Fall, they also do the incredibly pretty love song “New Found Year.”

“Leaps And Bounds” is another highlight from the first disc. This is a song that appeared on the Gossip album, and this live version is excellent, with a great energy. I also love this rendition of Crowded House’s “Into Temptation.” The crowd understandably gets excited the moment they recognize the tune. “You Can Put Your Shoes Under My Bed” has my favorite title of this release, and is a song that was originally included on Paul Kelly’s 1985 record, Post. While this live version lacks the saxophone of the original, I actually prefer this version. It features harmonica instead, and also features excellent vocals. It’s a very moving rendition. The first disc then concludes with the Crowded House song “Private Universe.”

The second disc gets off to a great start with an excellent, energetic rendition of Paul Kelly’s “Dumb Things.” The crowd is excited the moment the song starts, and I’m excited the whole way through. This song always works for me. “Saw the knives out, turned my back/Heard the train coming, stayed right on the track/In the middle, in the middle, in the middle of a dream/I lost my shirt, I pawned my rings/I’ve done all the dumb things.” I’m particularly fond of the keyboard in this version. “Dumb Things” is followed by “One Step Ahead,” one of only two Split Enz songs on this CD. This live version has a short guitar intro before the song kicks in. “If I stop, I could lose my head/So I’m losing you instead/Either way, I’m confused.” The other Split Enz song performed here is “Message To My Girl.”

“Better Be Home Soon” is a Crowded House song that was released as a single and included on the 1988 record Temple Of Low Men. The audience sings along on this live version: “I know I'm right/For the first time in my life/That's why I tell you/You'd better be home soon.” “To Her Door” is one of Paul Kelly’s most well-known and loved songs, from his 1987 album Under The Sun (the album that also gave us “Dumb Things”). Just listen to the audience’s reaction the second the band starts this song. They follow that with “Don’t Dream It’s Over,” that huge hit from Crowded House, and the song that turned me on to the band back in 1986.

This two-disc set concludes with a couple of covers: Buddy Holly’s “Words Of Love” and “Moon River,” written by Henry Mancini and Johnny Mercer.

Disc One
Disc Two
Goin’ Your Way is scheduled to be released on December 11, 2015 through Omnivore Recordings. By the way, in case you missed it, Paul Kelly released a new album in January of this year, The Merri Soul Sessions.
Posted by Michael Doherty at 2:58 PM