Circles Around The Sun: “Interludes For The Dead” (2015) CD Review 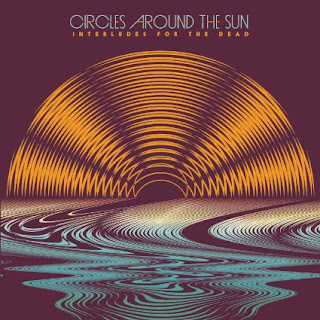 This year saw a Grateful Dead reunion of sorts, without Jerry Garcia of course, and with Trey Anastasio in his place on guitar. Those shows were a celebration of the band’s music, marking fifty years since its inception. Justin Kreutzmann (son of drummer Bill Kreutzmann) designed some visuals to be shown during the band’s lengthy set breaks at those concerts, and asked Neal Casal to provide the music. The result was a band known as Circles Around The Sun, and an album titled Interludes For The Dead, a two-disc set of instrumental music that works to convey the feeling of the whole experience without being too derivative. You’ll notice that many of the track titles use words from titles of Grateful Dead songs, sometimes in interesting combinations, like “Space Wheel” (the very first time I saw the Grateful Dead they played “The Wheel” out of “Space,” so I know just where they’re coming from here). This music was recorded live in a studio over two days, without anything added to it later. In addition to Neal Casal on guitar, the band consists of Adam MacDougall on keyboards, Dan Horne on bass and Mark Levy on drums.

Neal Casal was a fan of the Grateful Dead back in the day, and a couple of years ago he put out a special Record Store Day seven-inch of “Mountains Of The Moon” (which I was very excited to get, and am still excited to have). And he recently has had the good fortune of playing occasionally with Phil And Friends. It was from working with Phil And Friends that the title for the first track came about. As Neal tells us in the liner notes to this two-disc set, Phil told him, in answer to a question about a difficult musical transition, that they would just hallucinate a solution. And so we have “Hallucinate A Solution,” which becomes a very good jam with a sort of hypnotic groove that becomes soothing, like the ocean. This track is approximately twenty minutes. It’s followed by “Gilbert’s Groove,” a kind of slow groove with a bit of a darker tone to start. But it becomes fun as it goes on. The guitar several minutes in reminds me of the sound from something like “Estimated Prophet,” and then much more strongly resembles “Shakedown Street” around eight minutes in and again right at the end. The song’s title is a nod to Gilbert Shelton, who did the artwork for the cover of Shakedown Street, so there you have it.

“Kasey’s Bones” has a fun groove, with a kind of bluesy rock base. It also has definite hints of “Casey Jones,” as you might guess from the title. There is a bit of funk to it, particularly in the bass approximately halfway through, and then the jam builds in energy, with the guitar especially going wild. Toward the end it goes into spacey territory. And then “Space Wheel” begins in spacey territory, before definitely dipping into a gorgeous, slow “The Wheel,” sounding like those great versions from the 1970s. This track grooves on that opening section of the song, not doing the full song, of course. It stays in that sort of spacey realm, teasing and dancing at the edges, which is kind of wonderful.

The second disc opens with “Ginger Says,” a song whose title makes me think of the Velvet Underground (“Candy Says,” “Lisa Says,” “Stephanie Says”). This tune features a slow, hypnotic groove, and has a bit of a “West L.A. Fadeaway” feel at moments. That is followed by this set’s longest jam, “Farewell Franklin,” which is twenty-five minutes. Based on its title, I expected it to be basically a play on “Franklin’s Tower,” but it actually has something of an “Eyes Of The World” vibe. And then it takes an interesting turn like fourteen minutes in, led by Adam MacDougall on keys, going in a heavier direction. And the title “Saturday’s Children” makes me think that track will be some bizarre combination of “One More Saturday Night” and “Mason’s Children,” but it really has more of an “Althea” feel.

The title “Scarlotta’s Magnolia” is a fun, playful combination of “Scarlet Begonias” and “Sugar Magnolia.” At my first Grateful Dead show, the band kicked off the second set with “Sugar Magnolia” into “Scarlet Begonias,” and “Scarlet Begonias” was one I always appreciated hearing (though it was many shows before I finally saw a “Scarlet”/“Fire” combination). This track starts off with a play on that tune, and should get you smiling and dancing, for it has a very positive vibe. And I love the bass. Then “Hat And Cane” goes in a very different direction, toward songs like “Dark Star” and “Wharf Rat.” The second disc concludes with “Mountains Of The Moon,” the only direct cover in this collection, and the one Neal Casal covered on that Record Store Day seven-inch. Here it is presented as an instrumental, and it sounds absolutely wonderful.