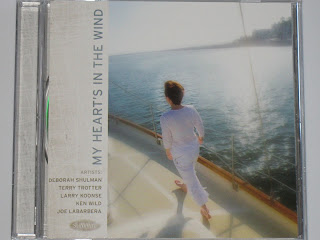 Jazz singer Deborah Shulman’s new CD, My Heart’s In The Wind, has a warm, late-night and intimate feel. Like to escape the cold you’ve stumbled into some wonderful after hours place, where the alcohol flows freely, while the cold winds continue outside. And as the night goes on, things become more intimate, and you’re in no hurry to leave this place – and no one’s asking you to anyway. On this CD she is joined by Terry Trotter on piano, Larry Koonse on guitar, Ken Wild on bass and Joe LaBarbera on drums. Terry Trotter also did the arrangements and co-produced the album with Deborah Shulman. This album was actually recorded in 2007, and released in a limited edition at that time, with a different album cover. (Though both show her on a boat, I actually prefer the original cover, which has a more romantic image.) Now, with this new release, a wider audience gets the chance to enjoy this music. The CD includes liner notes by Thomas Cunniffe.

The album opens with “The Shining Sea,” written by Johnny Mandel and Peggy Lee. I really love Deborah Shulman’s version, which has a great warmth. The version I’ve heard by Peggy Lee has more of an orchestral arrangement, and I actually prefer this more intimate and immediate rendition, which has some sweet, delicate playing on keys, as well some nice touches on bass. “I can’t believe he’s gone/I think I’ll go where he might be/I’ll go/I need him so/I need our shining sea.” She follows that with a pretty and catchy version of “A Sleepin’ Bee,” with Terry Trotter and Larry Koonse working so well together supporting Shulman’s vocals. And the instrumental section is excellent. “A Sleepin’ Bee” was written by Harold Arlen and Truman Capote, and has been recorded by many artists over the years, including Mel Tormé, Julie Andrews and Tony Bennett.

Terry Trotter begins “My Foolish Heart” sweetly on piano, and then Deborah’s vocals are gorgeous and moving. “There's a line between love and fascination/That's hard to see on an evening such as this/For they both give the very same sensation/When you're lost in the magic of a kiss/His lips are much too close to mine/Beware, my foolish heart.” And then Larry Koonse suddenly comes in for a delicious lead part on guitar halfway through. “My Foolish Heart” was written by Victor Young and Ned Washington. Another highlight is her rendition of “My One And Only Love.” I love what Deborah Shulman does with this song, making it her own. There is an honesty and intimacy in her approach. Plus, Larry Koonse does some interesting and surprising things in his lead part on guitar. And I love what Terry Trotter and Joe LaBarbera do on “Sometime Ago,” perhaps the lightest track on this release.

When I was in sixth or seventh grade, I had a teacher who played these educational records that were supposed to teach us about events in history. I just remember that a booming voice would say, “You are there,” right at the start of each one. It always struck me as funny, and I can’t recall anything else about those records. Well, on this album, Deborah Shulman covers “You Are There,” a song written by Dave Frishberg and Johnny Mandel. The song has absolutely nothing to do with those educational records, but Johnny Frishberg did write “I’m Just A Bill” from the Schoolhouse Rock program. So there. Deborah Shulman delivers another excellent vocal performance on “You Are There.” “My dearest dream is gone/I often think there’s just one thing to do/Pretend the dream is true/And tell myself that you are there.” There is such love in her voice, somehow giving a sort of happiness to what could be very depressing lines.

The album concludes with “Shiver Me Timbers.” It might surprise you to find a Tom Waits composition on a CD that includes songs from Stephen Sondheim and Johnny Mandel, but Deborah Shulman does a good job with it. “Shiver Me Timbers” originally appeared on Tom Waits’ 1974 record, The Heart Of Saturday Night. Deborah Shulman sings “And I know Joe Conrad/Will be proud of me” instead of “And I know Martin Eden's/Gonna be proud of me.” By the way, this is the song that gives this CD its title.

CD Track List
My Heart’s In The Wind is scheduled to be released on January 12, 2016 through Summit Records.
Posted by Michael Doherty at 2:57 PM