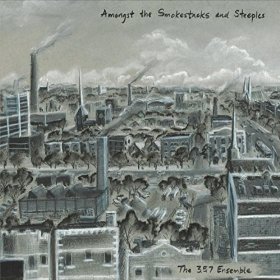 The 3.5.7 Ensemble is a group of jazz musicians based in Chicago. At the group’s core is the quintet of Nick Anaya on saxophone, James Davis on trumpet, Tim Stine on guitar, Chris Dammann on bass and Dylan Andrews on drums. Sometimes the band shrinks to the trio of Nick, Chris and Dylan, and sometimes it expands to a septet to include Richard Zili on clarinet and Jim Baker on piano; thus the group’s name (though apparently sometimes the group expands even further). The group’s newest CD, Amongst The Smokestacks And Steeples, is a two-disc set of compositions from the last several years, recorded toward the end of 2013. And this band is completely on. These talented musicians venture into lots of different territory on these tracks, and I love how they’re able to enter and explore a sort of chaos and then pop right out of it again. They’re able to move freely among various worlds, and take us on some excellent journeys. One brief mention about the liner notes: I know I’m getting old and all that, but the liner notes for this set are so bloody tiny and in a sort of handwriting that I have trouble reading them.

The first disc opens with a short piece titled “Dangurangu,” the only cover tune on this CD. It is a traditional Zimbabwean folk tune, which as I’ve discovered can be played in many different ways (and at varying lengths). The version here has the traditional percussion as its base, but then adds some interesting and delicious work on horns. Mabel Kwan joins the group on prepared piano on this track. That’s followed by one of my favorite tracks, “Red Green And Blue,” which begins quietly, tentatively, like testing the waters, warming up. There is an excitement as well as a playfulness to this opening section. And then after it builds wildly, it suddenly gives way to a mellow, smooth jazz feel, a change which is almost humorous in its abruptness. This track does explore various areas, and I particularly love when the bass is prominent, creating a great groove, with other instruments playing lightly over it, like a delightful conversation among sprites and other mischievous creatures. And then later there is a bass solo. This track was composed by Chris Dammann.

“Ode To 2” is another favorite, mainly because of that wonderful bass line walking along coolly, casually, as horns explode around it. There is a very hip vibe to this track that is totally delicious. And I love the section with guitar, bass and drums. Tim Stine wrote this one. The first disc concludes with a great, lively number, “Insatiable Machine,” composed by Nick Anaya, and featuring some absolutely wonderful stuff on guitar, and of course on saxophone. And toward the end there is a drum solo. This is yet another of the CD’s highlights.

The second disc, as the first, opens with its only cover, this time a tune called “Wandering” written by fellow Chicago musician Fred Anderson (and included on one of Anderson’s final albums, Staying In The Game). The 3.5.7 Ensemble does a really good rendition of it, turning in a version that is respectful while also somewhat exploratory, keeping it interesting. That’s followed by an odd little number titled “Dance, Sing, Paint, Write.” Hey, man, it’s hard to do all of that in less than two minutes. But this short tune is actually broken up into even shorter sections, each quite distinct, and the tune itself seems to do all of those things in its short span.

One of my favorites on the second disc is “Stand Fast,” composed by Nick Anaya. This is such a wild and interesting tune, and it announces itself as such right from the start, coming on urgently, like a chase scene. And then it takes on this incredibly cool vibe that you just want to sink into. This one has a lot of personality, and I really like the drum solo near the end.

“Shrouded In Clouds” is also pretty wild, and I especially dig the bass line. The CD then concludes with “Garuda,” composed by Chris Dammann. This one also takes us on an interesting journey. (Garuda, by the way, is some sort of birdlike man in Hinduism. It’s also the title of a monster movie.)

Disc 1
Disc 2
Amongst The Smokestacks And Steeples is scheduled to be released on January 1, 2016 through Milk Factory Productions, though apparently it was originally made available in December of 2014.
Posted by Michael Doherty at 5:57 PM