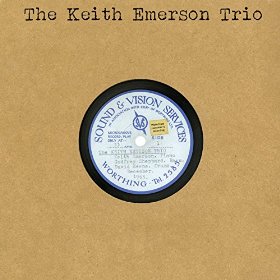 When I was a kid, I won an Emerson, Lake And Palmer poster at the town fair. That led me to want to hear what the band actually sounded like. The poster was cool, but even as a child, I knew it wouldn’t be right to put it up without being a fan, or at least knowing a few tunes. What I discovered was I already knew (and loved) a lot of their material; I just hadn’t known the band’s name. My appreciation for that music has never diminished. But for some reason or other, I never really explored what these musicians had done prior to the formation of this band. Before that famous trio, Keith Emerson was involved in another trio, this during his teens. Now with the release of The Keith Emerson Trio, we get a chance to hear this early band (with recordings made in Keith’s parents’ living room). And this music might surprise you. It certainly surprised me. The Keith Emerson Trio is a collection of instrumental tracks mainly in the jazz realm, but with a bit of rock and roll as well. The tunes are mostly covers, but there are a couple of original Emerson tracks too. The trio is Keith Emerson on piano, Godfrey Sheppard on bass, and David Keane on drums. The CD includes new liner notes by Keith Emerson, with thoughts on each of the tracks.

The CD opens with “You Say You Care,” a tune written by Leo Robin and Jule Styne for Gentlemen Prefer Blondes. But of course the version that inspired Keith Emerson was that by John Coltrane, on the 1958 record Soultrane. I really like Keith Emerson Trio’s rendition. It has a lot of energy, and a bit of swing to it. There is also a nice bass solo. That is followed by “There Will Never Be Another You,” a standard written by Harry Warren and Mack Gordon, and recorded by a large number of artists over the years. This version by The Keith Emerson Trio starts off sweetly, and then kicks in, becoming a fun number. This one, too, has a bass solo.

One of my favorite tracks is their version of Oliver Nelson’s “Teenie’s Blues,” here titled “Teenies Blues,” which starts off deliciously with bass and drums. Keith Emerson then gets loose over that cool rhythm, but the bass figures very prominently here. That is followed by two originals. The first is “Winkle Picker Stamp,” which is based on Earl Guest’s “Winkle Picker Stomp.” And here is where things turn toward rock and roll. Things continue in that vein with “56 Blues,” the other original composition, named after the number on the house where these recordings were made. Both of these tracks are a lot of fun.

They keep things lively with a cover of “You Came A Long Way From Saint Louis,” written by Bob Russell, and then return to jazz to wrap things up with a cool rendition of Hank Mobley’s “Soul Station.”

CD Track List
The Keith Emerson Trio was released on CD on November 6, 2015.
Posted by Michael Doherty at 6:10 PM