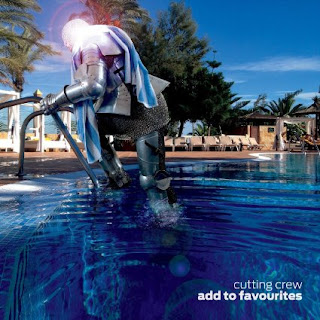 Cutting Crew’s 1986 debut album, Broadcast, featured the huge hit “(I Just) Died In Your Arms,” an excellent tune. There were several other good songs on that record, and I listened to that album quite a bit (I still have it on vinyl). But I admit, I lost track of Cutting Crew somewhere along the way. It turns out the band had broken up in the 1990s after just a few records. Then, following the death of Kevin Scott MacMichael, Nick Van Eede reformed the band and put out a CD in 2005. Add To Favourites is the band’s first new album in ten years, and it features all original material, written or co-written by Nick Van Eede, the only original member to still be in the band. The band now includes Joolz Dunkley on guitar, slide guitar, mandolin and organ; Gareth Moulton on guitar; Jono Harrison on piano and organ; Nick Kay on bass; and Martyn Barker on drums.

The album opens with “Till The Money Runs Out” (actually, it’s written as “Till The Money Run$ Out”), a wonderful, positive-feeling pop tune. This is a great lead-off track, as it grabbed me right away. It has a light, fun feel, and even has some “Doo-ra-lan” vocals, designed to put you in a good mood. Here is a taste of the lyrcs: “Now I don’t want to steal your crown/Just want you to use it/And I don’t want to bring you down/Just try not to lose it/Before the money runs out/Before you scream and shout.” And this track features the Blackjack Horns. It’s followed by “Looking For A Friend,” a delightful, catchy number with a bluesy element. This track also features the Blackjack Horns, and I completely love what they do here. This is one of my favorites. This verse obviously holds interest, particularly in view of the band’s history: “I’ve been looking for a guitar player/He’s probably got a beer in his hand/Came here about ten years ago/They got him playing in the best rock ‘n’ roll band/And I’m still looking for my brother/They say I’ll find him out in the fields.” It’s interesting that this song has such a fun groove, especially when lines like “Friends and lovers/Taken long before their time/And I never, never got to say goodbye” could be totally depressing in another musical context. Rather than depress us, Cutting Crew will have us smiling, even dancing.

The group then switches gears for “Berlin In Winter,” a more serious-sounding song about the Berlin wall, with some nice work by Jono Harrison on piano. It ends with just a bit of chatter in German, and is followed by “Kept On Lovin’ You,” a slower number with some R&B elements. “In the arms of another, I kept on wanting you/’Cause when you love someone/It’s all you’re gonna do.” I love the backing vocals provided by Tom Arnold, TJ Davis and Angela Marcella Brooks. “San Ferian” has a sweeter acoustic sound. And I love halfway through when it kicks in with that great steady pounding. For me, that’s when the song really becomes wonderful. Joolz Dunkley plays mandolin on this track, and Mak Norman is on bass.

“Already Gone” has something of a Roy Orbison or Chris Isaak vibe in the vocal approach. “But haven’t you said enough tonight?/Didn’t we make the morning light?/Only a fool would turn back to see/You had already gone/You had already gone.” Tom Arnold plays accordion on this track. Then “As Far As I Can See” is a pretty tune, with some nice, delicate stuff on piano by Jono Harrison. Joolz Dunkley plays slide guitar on this track, and Tom Arnold is on organ. “Well, as far as I can see/And as long as I believe/That as hard as I keep drinking/The years laugh back at me.” There is also some really nice guitar work by Gareth Moulton. And then, as this song seems to be ending, like five minutes in, it takes a surprising and extreme turn.

“Biggest Mistake Of My Life” is an odd one. There are moments when I really like this song, and other moments when I don’t. It makes a couple of weird references to pop culture – to Fifty Shades of Grey, “Single Ladies (Put A Ring On It).” But I like lines like, “Yeah, but you got restless, and I felt helpless/The heels you wore just made me breathless/I never bought that innocence you pleaded/’Cause if I got angry, you’d get cranky/Fall asleep from some hanky panky.” And that little catchy hook reminds me just a bit of The Kinks’ “Victoria.”

It’s followed by one of my favorite tracks, a gorgeous, mellow tune titled “Only For You.” Check out these lyrics: “For all the times I started a fight/A couple of drinks/Would make you feel right/Then there’d be no more lies to tell for you/Only for you.” This track features the Blackjack Horns, with a wonderful lead on saxophone by Gary Barnacle. This track builds in power and emotion, before returning to a more mellow vibe. The album then concludes with “(She Just Happened To Be) Beautiful,” a good folk song that makes me think a bit of David Wilcox. There are some really good lines in this song, like “She was old enough to haunt me, but young enough to run,” “She covered me with laughter, I covered up my shame” and “I was out of my depth, she was out of control.” This track features Dag Erik Osvold on guitar and percussion, Daniel Hovik on piano and Jack Birchwood on flugelhorn.

CD Track List
Add To Favourites was released on October 16, 2015 on In Like Flynn Records.
Posted by Michael Doherty at 2:33 PM