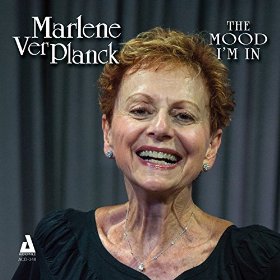 Marlene VerPlanck is an excellent jazz vocalist who has been performing and recording for decades. Her first album, I Think Of You With Every Breath I Take, was released in 1955 (and re-issued in 1983). Since then, she’s tackled standards as well as more obscure songs, and even lent her voice to commercials. On her new release, The Mood I’m In, she sings some favorites and some songs you might have forgotten about. But even if you haven’t heard these songs before, she makes them seem familiar. She is in her eighties now, and it’s remarkable how good her voice still sounds. Seriously, she sings the hell out of these tunes. On this album, she is joined by John Pearce on piano, Paul Morgan on bass, Bobby Worth on drums, Mark Nightingale on trombone, and Andy Panayi on saxophone and flute. And though the focus is largely on the vocals (as you’d expect), each of these musicians has plenty of opportunities to shine. This disc has liner notes by Leon Nock.

Marlene VerPlanck opens the album with its title track, “The Mood I’m In,” which was written by Paul Francis Webster and Pete King. It’s a fun, playful tune, and Marlene approaches it with joy. “But I'm going the route single/Oh, don't look to find me/Caught up in that marital spin/Yet someday I may sight one/Who looks like the right one/And waltz down the aisle with chagrin/You see, my friends/It all depends on the mood I'm in.” There’s also a really nice instrumental section. It’s a great, lively tune. And then Marlene Verplanck slows things down a bit for a very cool rendition of “Me And The Blues,” a song composed by Ted Koehler and Harry Warren. I love the strength and attitude in her voice as she sings, “They love you and deceive you/Then they up and leave you/What makes them so no good/I’m through with love/The best you get is nothing but trouble.” And listen to that horn! This is one of my favorite tracks.

Paul Morgan starts “Free And Easy” on bass, soon joined by Marlene VerPlanck on vocals. I love that section with just the two of them before the rest of the band comes in. And then the lead on flute by Andy Panayi is wonderful. But I think I actually prefer the slower numbers, because another of the highlights for me is her take on “It Shouldn’t Happen To A Dream,” which was written by Duke Ellington, Johnny Hodges and Don George. This is a song that’s also been recorded by Sarah Vaughan, Carmen McRae, Dinah Washington and Anita O’Day, among others. There is something sweet and intimate in Marlene’s version that I just love. Not just in her vocal delivery, but in that really good lead spot by Mark Nightingale on trombone. Marlene also covers Duke Ellington’s “All Too Soon,” which was co-written by Carl Sigman. This is another gorgeous, slow number, with some wonderful work by John Pearce on piano.

Another song that Marlene has a lot of fun with is “Come On Strong,” written by Sammy Cahn and Jimmy Van Heusen. Of course, these lyrics are inherently fun: “I want to feel some weird vibrations/Follow your basic inclinations/And if you’re going to come on, come on strong” and “Make me feel so right that it’s wrong/Unless I feel the ceiling cave in/How will I know we’re misbehaving.” I love Marlene’s delivery. There’s certainly no holding back here. And then there’s a great instrumental section, featuring excellent work by Andy Panayi on saxophone.

The CD concludes with “Too Late Now,” written by Alan Jay Lerner and Burton Lane for the 1951 movie Royal Wedding. Marlene VerPlanck does a wonderful job with this pretty number. “All the things we’ve done together/I relive when we’re apart/All the tender fun together/Stays on in my heart/How could I ever close the door/And be the same as I was before/Darling, no, no, I can’t anymore/It’s too late.”

CD Track List
The Mood I’m In is scheduled to be released on CD on January 1, 2016 on Audiophile Records. It was made available as a download on December 9, 2015.
Posted by Michael Doherty at 2:45 PM