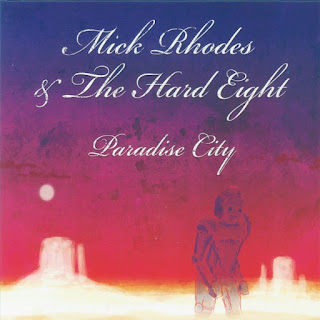 Mick Rhodes And The Hard Eight formed in 2007, and are based in Claremont, a town just a bit outside of Los Angeles. Some of the music on their excellent new release, Paradise City, seems to have been informed by the band’s location (particularly “Under The Bustle,” one of my personal favorites). Paradise City is the band’s follow-up to the debut ‘Til I Am Dust, which was released in 2011. There are some very cool guest musicians on this CD, including Rick Shea, Danny Ott and John McKnight. There are also some wonderful lyrics, like this line from “Last Summer”: “Every breath you steal could be your last.” And these lines, which open “Keep It Simple”: “I like a girl in a sundress/Don’t give a damn if her hair’s a mess/I like a girl with no makeup/Just like she looks like when she wakes up.”  I also really like these lines from that song: “Three chords and a point of view” and “But California’s got her hooks in me.” All the songs on this CD are originals, written by Mick Rhodes.

Paradise City opens with “Married Girls.” The first lines of this CD made me laugh out loud: “Don’t fall in love with a married girl/Married girls will break your heart.” And something about the way those lines are sung bring to mind Irish folks tunes. But this song is mainly rock, with some country to it, and is a fun number. And of course there are some good lines, like “Your obsession is her caress.” And there is a section with just vocals and drums, like some of those great 1980s tunes.

The band then gives us more upbeat, fun rock and roll with “Since You,” which has the welcome addition of horns. That’s Roger “King” Ehrnman on saxophone, and John McKnight (of Fishbone) on trombone. There is also some wonderful work on keys. This song is about that great feeling when all seems right with the world, because of a special someone being in your life. “Everything is right and it’s all because of you.”  Ah yes. And this love has some far-reaching results: “The crooked politicians/Serve soup in midnight missions/Since you/The Middle East is peaceful/No war, no hate, no evil/Since you.” The music has that feeling about it as well, feeling very positive and fun, to match the lyrics. “The sky’s a little bluer/My love’s a little truer/Since you.” I like that line about his love being truer; it’s not just the world being a better place, but he is a better person. That’s the kind of feeling we all want.

“That Kind Of Love” starts off sounding mellow and kind of sweet, with a wonderful intro on guitar. And the vocals at first match that feel. “Fear and trouble fade with the sun/You can let your feelings show/You’re not afraid of anyone.” But this song has surprises, particularly in its attitude when it kicks in: “Yeah, I’m a bastard/You think you can break a heart/But I can break it faster.” This is a good country rock song. “I’d rather have that kind of love/Than to have no love at all.” Rick Shea plays pedal steel on this track. Rick Shea also plays pedal steel on the following track, “Don’t Remind Me,” which has a traditional classic country vibe and some good lyrics, such as “It’s true I’ve been untrue/I’ve lied and wandered far from home” and “Please don’t remember where you can find me/I’ll be somewhere far from you/Please don’t remind me.”

One of my favorites is “Under The Bustle.” If you dig Cracker, you’ll likely enjoy this tune, its attitude, its sound. This one is about Los Angeles, with lines like “Orange groves are gone now/In their place, Burger Kings” and “But still we choke on all that smoke/And the freeway’s such a treacherous run/Rolling and riding/Slipping and sliding/It’s a sweet dream.”  They even end it by repeating “Los Angeles.” This is just a very cool tune.

The guitar at the beginning of “Whisky Girl” reminds me of Neil Young. And this tune is allowed to spread out (like a couple of the best tunes from Young’s Everybody Knows This Is Nowhere), and features some wonderful guitar work in its extended instrumental section. “I’m so desperate to move you/Don’t want to share with anyone.”

This CD ends with a mellow, positive song titled “Go To The Love.” Sure, the title is a bit cheesy, but that line is sung with an earnestness that sort of disarms your cynical, sarcastic self. “When you’re down and alone/Have no place to call your home/When no peace gonna come/And your beliefs have come undone/Go to the love.” I also really like this line: “And the giving tree has given up.” Danny Ott plays electric guitar on this track, and Walter Clevenger plays acoustic guitar. Dixie Reese and Solid Ray Woods provide backing vocals.

Paradise City is scheduled to be released January 23, 2016 on Hot Tramp Records.
Posted by Michael Doherty at 4:34 PM