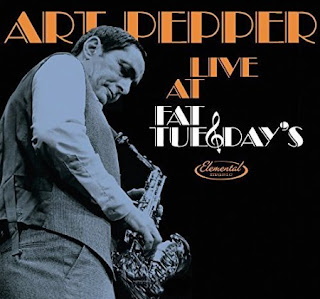 At the beginning of the year, three live albums by Art Pepper were released, three volumes of Neon Art, all with music from concerts the saxophonist performed in 1981. This music was so fantastic that after the release of the third, I lamented the fact that there wasn’t a fourth volume coming. But we are now treated to something equally amazing – Live At Fat Tuesday’s, which was also recorded in 1981, and which was previously unissued. At this show, on April 15 in New York, Art Pepper was joined by Milcho Leviev on piano, George Mraz on bass and Al Foster on drums. (Of those musicians, only Milcho Leviev plays on any of the Neon Art discs; he is on Neon Art: Volume One.) And as on Neon Art, this disc includes some nice long jams. After all, the disc contains seventy minutes of music, and only five tracks. This disc also includes a forty-page booklet, with an interview Brian Priestley conducted with Art Pepper in 1980, as well as an interview that Zev Feldman conducted with Laurie Pepper earlier this year. There are also some thoughts and memories by John Koenig, Stephane Ollivier and Steve Getz. And there are some photos, making this an all-round excellent package.

This disc opens with a Thelonious Monk tune, “Rhythm-A-Ning,” which Al Foster kicks off on drums. You probably know Foster from his work with Miles Davis, and he’s fantastic here. And it’s not long before the band is just cooking, and I love the way Art Pepper and George Mraz are off and running together. And then Milcho Leviev is rocking there, and there is hardly a space for a breath. The song is like a force that no one could control, or would want to. The audience at this venue must have been beside themselves, not sure whether to dance or just stare. And then after six minutes or so, Art Pepper does take a breather, but the tune itself doesn’t relax much. Milcho might technically be leading, but George and Al are flying right along with him, and then Milcho is off like a maniac outrunning his own fire. And then George Mraz takes a bass solo, followed by a brief solo by Al Foster, presented in spurts between which the whole band returns to the theme.

That’s followed by a standard, Cole Porter’s “What Is This Thing Called Love?” There is some wonderful stage banter leading into this tune, joking about a request. The song is played at a good clip, with some tremendous playing by all four musicians. Clearly, these guys aren’t ready to calm down yet. And like six and a half minutes in, Milcho Leviev delivers some unusual and intriguing stuff on piano as he begins his lead section, and at moments seems to be attacking the piano (with the piano loving it). And then there is this great section with just bass and drums, the two conversing, before Art and Milcho rejoin them.

They finally do slow things down a bit with “Goodbye,” a composition by Gordon Jenkins. In the introduction to “Goodbye,” Art Pepper mentions how Benny Goodman would sign off with this tune. And then he offers up a beautiful rendition, Art blowing sweetly, truthfully. Sure, several minutes in, there is some brief brash playing, but soon he returns to beauty. This track has some interesting peaks, but for me the best moments are when they return from those peaks – those are the moments that are the most emotionally engaging.

Art Pepper then dips into his own compositions, beginning with “Make A List, Make A Wish,” and wow, just wow. This version is just bloody amazing, beginning with some great work on bass by George Mraz, with the band really grooving. Emerging from that groove is some particularly impressive playing by Milcho Leviev on piano. His lead part grows into some cool and delightfully persistent beast. Interestingly, as he ends that lead section, the bass is allowed to rule for a little while, rather than the tune going right into Art’s lead. That way, Art’s section emerges from the groove, as Milcho’s was able to. And then Art Pepper’s work is a total joy, played over a fun groove by the other musicians. I love this track. Another version of this tune you should check out is the one that was included on Neon Art: Volume Three, that one with different musicians.

This disc then concludes with “Red Car,” another of Art Pepper’s own compositions, one included on his 1976 LP The Trip. George Mraz gets things grooving immediately on bass, and you can hear someone shout out “Yeah!” This one is so much fun, and should get you moving. Art sounds perfect, and there is something joyful in his playing, in the sound, as the rest of the band rocks beneath him. And Milcho Leviev continues the high spirits with his lead spot on piano. Al Foster delivers a cool drum solo toward the end. If you want to hear another great version of this tune, check out Neon Art: Volume One.

CD Track List
Live At Fat Tuesday’s was released on November 20, 2015 through Elemental Music.
Posted by Michael Doherty at 11:28 PM