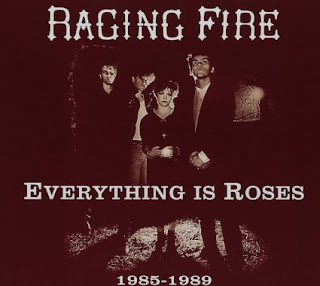 I wish someone had turned me on to Raging Fire back in the day. I was a teenager when this music was originally released, and it would have been a very welcome change to most of the stuff that was being released in the late 1980s. But it’s never too late, I suppose, and I am thoroughly enjoying this music now. Raging Fire adds some folk, country and blues elements to punk and rock music, with seriously cool results. The new compilation Everything Is Roses 1985-1989 includes all the tracks from the band’s 1985 EP, A Family Thing, and some tracks from the LP Faith Love Was Made Of, plus a bunch of previously unreleased tracks. And there is a new track at the end, recorded in the spring of this year by the surviving members – the band’s first new recording in more than two decades. The liner notes include several photos.

This compilation begins with the four tracks from A Family Thing, presented in the original order, starting with the title track. The title track begins as a quiet acoustic number, with just guitar and vocals. And then like forty-five seconds in, the song kicks in with a great force. But it’s not like a steady blast; the song has interesting peaks and valleys, and changes in pace. It’s followed by “You Should Read More Books” (a title I love), which is punk right from the start, and is bloody great. And then the first line of “Four Tears (Church Street)” had me laughing aloud: “Spent too much on polyester and chocolate.” Plus, this track has a great punk groove on bass. This band is exciting. All these years later, the tunes have the effect on me that I imagine they would have had if I’d heard them at the time of their release. You know what I mean?

Following the EP tracks, there are some tracks from Faith Love Was Made Of: “Knee Jerk Response,” “You And Me,” “After Loving One Man In East Texas” and “The One You Hate.” “You And Me” goes more in a hard rock direction, with some bluesy elements. And then “After Loving One Man In East Texas” is a great bluesy acoustic number, with a strange, sweet vulnerability in Melora Zaner’s vocals at times. It’s a very cool tune, but I like “The One You Hate” even more. It combines punk, rock and a bit of blues, and is one to get you moving.

Most of the rest of the tracks of this compilation were previously unreleased demo recordings from 1987 to 1989. “The Morning In Her,” recorded in April 1987, has a wonderful raw rock sound and some impressive vocal work from Melora Zaner. From that same session comes the bluesy rock number that gives this compilation its title, “Everything Is Roses.” “Nickels, Dimes, And Quarters” is an incredibly lively tune with a Bo Diddley influence. “Pain Of Loss Imagined” is a really good pop tune from 1989. “Angel A Blue” is the collection’s only live track, recorded in June of 1989. The sound quality isn’t perfect, but it’s a good song.

The CD concludes with a new track, a new version of “More Than This” (the original version was included on Faith Love Was Made Of), recorded in the spring of 2015, the first recording by the band in twenty-five years. Joe Blanton and Warner Hodges join the band on guitar, in place of Michael Godsey, who died in 2012. Les Shields returns on bass (Shields had played on the 1985 EP, but then left the band). Melora’s voice still sounds great, by the way. They did a reunion show in early October, and if this track is any indication of what they sound like now, I hope they’ll consider touring. “And once again it’s a wonderful day.”

CD Track List
Everything Is Roses 1985-1989 was released on October 6, 2015. Also, half of these tracks were included on a special vinyl release.
Posted by Michael Doherty at 2:20 PM