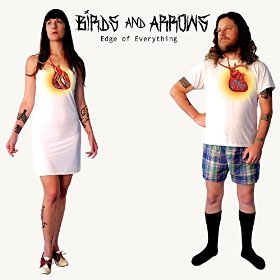 Birds And Arrows is the duo of Andrea Connolly and Pete Connolly, based in North Carolina (though moving west soon). I got turned on to Birds And Arrows earlier this year through the compilation Christmas Time Again! by The dB’s & Friends. It’s an album that’s been released several times, each time with some different tracks. One of my favorite tracks from the newest edition is Birds And Arrows’ “In The Bleak Midwinter.” So I was excited to hear more from this duo, and Edge Of Everything, their new full-length studio release, is beautiful. And you fans of The dB’s will be excited to know that Chris Stamey produced and mixed this album, and also plays on it. Several other musicians lend their talents to this release, including Robert Sledge, Eric Haugen and Matt Douglas. Skylar Gudasz joins them on vocals and flute on “Edgewood.” (Gudasz also appears on Christmas Time Again!, delivering the pretty “The Sounds Of Christmas.”) All of the songs on this disc are originals, written by Andrea and Pete Connolly.

The disc opens with “Desert Home.” I’m not sure why it is that the idea of home often brings out the best in songwriters, but it does so again here. This is a very strong, emotionally charged opening track. Here is a taste of the lyrics: “I never intended to be gone this long/And I never pretended to be involved/Now the road is burning as you did for me/My chrome heart is yearning to be/Home.” I particularly love the way they sing “Home” as its own line, giving it power and meaning. Jonathan Durlam plays guitar on this track.

They follow that with “Ghosts In The Water,” which begins with a sweet folk sound, then adds pop elements, and the results are wonderful. I love the feel of this track. Omar Ruiz-Lopez plays fiddle and mandolin on this track, helping make this one of my favorites. Pete takes lead vocal duties on “Trainwreck,” a song that opens with the line, “You’re a trainwreck.” But the lines that amuse me every time I hear it are ones they sing together: “Are you gonna hit that note?/I didn’t think so/I didn’t think so.” So sweetly mean, if that’s possible. Kyra Moore Holt plays banjo on this track.

“Wolf” is beautiful, mellow piano track, with some wonderful vocal work by Andrea. “So let's run and hunt something bigger/And I'll lose my mind in our rhythm/But in my wild head do I really have a choice.” It’s followed by another pretty tune, “Blackbeard Lullaby,” the CD’s only instrumental track.

“Fool’s Gold” then comes as something of a surprise, following those two tracks, as it starts with a cool groove on bass, with the drums quickly following, and for a moment you wonder if it’s going to be more of a dance tune. But when it kicks in, it has a sweet pop feel, with some nice touches by Matt Douglas on saxophone. (Matt Douglas also plays on “Detroit.”) Robert Sledge plays bass on this track.

“Catastrophe” is probably my favorite track, with its delicious, bright folk feel, excellent vocals, and really good lyrics. Check out these lines, which open the song: “You were the dam and I was the river, your many attempts to divert me/All in all they just made me bigger, even if they hurt me/The heart's a catastrophe between a budding girl and a boy like me/My head's full of hot air, desire and cotton candy/I'm all in.” Great, right? Plus, I like the touches on harmonica throughout this song. I just love this tune. The CD then concludes with its title track, “Edge Of Everything,” a sweet folk tune that features Kyra Moore Holt on banjo. This one too has some excellent lyrics. “Well, the trees get as tall as time will allow/If time will allow them to be/And I'm feeling awful small as space becomes a crime/And space is getting harder to find.”

CD Track List
Edge Of Everything was released on October 30, 2015.
Posted by Michael Doherty at 9:59 PM