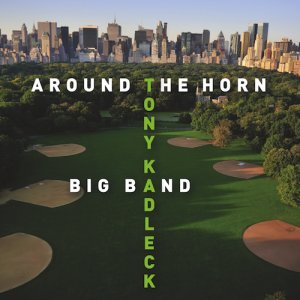 Tony Kadleck is an incredibly talented trumpet player who has played with an impressive list of artists, including Natalie Merchant, Joe Henderson, David Byrne, Boston Pops Orchestra and Harry Connick, Jr. And on Around The Horn, he presents his own big band arrangements of some popular songs, not just in the jazz realm but also songs from the pop world by artists like Stevie Wonder and Marvin Gaye.

The album opens with a fun rendition of John Scofield’s “Green Tea,” featuring Keith O’Quinn on trombone and Pete McCann on guitar. This tune has a really good groove and a bright sound, and it should get you feeling good. It’s always interesting to hear guitar figuring so prominently in a big band arrangement, and I’m also fond of the bass work here.

That’s followed by “Creepin’,” the first of two Stevie Wonder tunes to be included on this CD. “Creepin’” was originally included on Stevie Wonder’s 1974 LP Fulfillingness’ First Finale. Wonder’s original has something of mellow, jazzy feel, so it lends itself well to this kind of interpretation. I really like what Tony Kadleck does with the tune, and particularly like what Dave Ratajczak does on drums here, giving the song a more interesting groove. And toward the end he gets a cool solo. This track also features Jason Rigby on saxophone and Michael Davis on trombone. The other Stevie Wonder song covered on this album is “Don’t You Worry ‘Bout A Thing,” which appeared on Wonder’s 1973 LP Innervisions. Of course, this rendition lacks that kind of funny dialogue which opens the original version. But it’s still quite good, and features some really nice work on guitar by Pete McCann.

Tony Kadleck does an excellent rendition of Michael Brecker’s “African Skies,” featuring a guest trumpet solo by Michael’s brother, Randy Brecker. This track also features some wonderful work on piano by Henry Hey, as well as some excellent stuff on bass and drums. Another highlight for me is the fantastic rendition of Cannonball Adderley’s “Wabash,” with that cool groove and bright explosions of horns. This track just makes me so bloody happy. I could listen to this one all day.

The longest track on this album is a ten-minute rendition of “One Hand, One Heart,” written by Leonard Bernstein for West Side Story. I have to admit I am not a big fan of West Side Story (watching it only because of my fascination and love for Shakespeare), but I do like the way Tony Kadleck handles it, starting with that mellow theme but building off of it, dipping into some other themes from the musical. There are some beautiful moments here, as well as some lively, exciting moments. Tony Kadleck plays flugelhorn on this track, and Aaron Heick plays flute.

This CD concludes with “I’m Getting Sentimental Over You,” written by George Bassman and Ned Washington. This is an interesting rendition, with a different tone than most versions I've heard. It actually opens with drums, and has both a darker and livelier feel than usual.