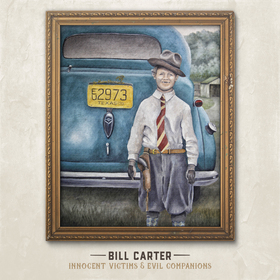 Based in Austin, Bill Carter is a singer, musician and songwriter who has been writing and performing for decades (he co-wrote a track on The Fabulous Thunderbirds’ 1986 Tuff Enuff LP). Bill Carter is mostly known for his songwriting, having his material covered by the likes of the Stray Cats (“Lust ‘N’ Love”), Robert Palmer (“Why Get Up?”) and Ruth Brown (“The Richest One”), among others, but he has also released some of his own material, as on 2013’s Unknown. On his new album, Innocent Victims And Evil Companions, he combines rock, blues and country elements in a really good collection of original material, all tracks written, arranged and produced by Bill Carter. Besides the vocals, he plays guitar, bass, harmonica and percussion. Joining him is an impressive roster of musicians, including Charlie Sexton on electric guitar, Dony Wynn on drums, Rich Bowden on fiddle and Kimmie Rhodes on backing vocals.

The album begins with “Black Lion,” a pretty good bluesy rock number. “Cold rain falling on an empty face/Black lion’s calling – crawling all over this place/All over this place.” That’s followed by “Recipe For Disaster,” which has a little more energy and is a more interesting song. Check out these lines: “And I’ve washed my hands in the bloody swamp where the soul thieves made their beds/I drank from the pool where the rebels stomped their arrogant shameless heads.” If you’re a fan of Warren Zevon and Tom Petty, you’ll almost certainly dig this tune. And then “Lost In A Day” at moments reminds me a bit of Roy Orbison, during the section where he sings, “Love fell hard on a time not forgotten/With fear of change and the blues when they walked in all alone,” both in the vocal line and the music.

One of my favorites on this CD is “Bughouse In Pasadena,” an incredibly fun tune, with some great stuff on keys and horns, and a humorous reference to BTO (“The radio only plays ‘You Ain’t Seen Nothing Yet’/But I always kinda liked Ba-Ba-Bachman Turner Overdrive”). And I like these lines: “There’s sad painting hanging crooked/And they make tacos that you best not eat/I might be better off homeless/Than in this prison with yellow stained sheets/Under lock and key twenty-four seven.” He makes being locked up in the bughouse sound like a party.

Another of my favorites is “Last Tear (Delaney’s Song),” particularly because of the line “Open up your heart, am I still there inside.” This is a mellower and kind of beautiful tune. I really like the addition of strings, which add a wonderful element without driving the song. “Memories, they dance around to the sweetest music/How I miss that sound/Maybe time and a little space/Will bring us back to where we belonged in the first place.” This is such a strong song, and it’s followed by “Fisherman’s Daughter,” which has a great, loose back porch sound that I totally dig. “Out in California, really comin’ down/Always bad weather whenever I’m in town/A big black cloud rollin’ through/With a twelve-string guitar and three dollars in my shoe.”

“Sooner Or Later,” with its lines “Sooner or later I’m gonna get my life straight/And if I live to be a hundred you know it’s never too late,” is a good song for me to listen to as I desperately try to get my shit together before the end of the year. (Don’t I make similar attempts every year? Bugger.) This is a good bar band rock tune. And “Moscow Girl” has something of a classic rock and roll vibe, its chorus reminding me a bit of the sound of the verses of Chuck Berry’s “Rock And Roll Music.” “Hey little Moscow girl/Can’t wait to see this world/Cross the ocean where you long to be be/Turning dreams into reality.”

Innocent Victims And Evil Companions is scheduled to be released on February 26, 2016 on Forty Below Records.
Posted by Michael Doherty at 4:52 PM