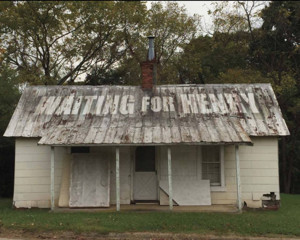 Waiting For Henry is a rock band with strong country and folk influences and a bar band edge and rawness, reminding me at times of bands like The Life Of Riley and Wilco. The band’s new release, Town Called Patience, is the second full-length CD, following 2013’s Ghosts & Compromise. It was produced by Mitch Easter, the man responsible for producing early records by R.E.M., who also adds some work on guitar and keys. This CD features original material, written by the band’s two singer/guitarists, Dave Slomin and David Ashdown. Mike Chun is on bass, and Rob Draghi, who joined the band last year, is on drums and percussion.

“Musconetcong,” the lead-off track, was written by Dave Slomin and begins with just guitar before the rest of the band comes in. And that’s something of an indication of the prominence of the guitars on this album. I really like a lot of the guitar work on this track, but it’s the feel of the vocals that draws me in. I love the way he plays with the words “time” and “wrong” in the song’s opening line, “There was a time before it went all went wrong,” with just a bit of twang, a bit of weariness, holding onto the words, giving them emphasis. There is also something of a sweet, sad, nostalgic feel to this one, which I love. This track is one of the disc’s highlights. It’s followed by “Gutterball,” which was also written by Dave Slomin, and has more of a rock feel.

The lines from “Matter Of Time” that always stand out for me are: “You and me took it all on chance, and lost those fifteen years/Nothing left but mix cassettes, tear-stained hearts and auctioneers.” I think it’s mainly the mix cassettes, such a clear image full of meaning and emotion, especially for those of us for whom making those tapes was so important. Then the following track, “Palms,” is one of my favorites. It was written by David Ashdown, and is one that grabbed me the first time I listened to this CD. Here are the opening lines: “I go for palms/You go for majesty/We go for songs/You go for tragedy/What would you do/’Cause it could happen to you/On the last day of your life.” Those first two lines are so unusual that I was immediately pulled into the song, curious as to where it would go, what it would say.

In the lyrics to “Parsippany” the band mentions Circle K: “Amber Waves and Circle Ks are over now.” Ages ago I applied for a job at a Circle K (which is a convenience store) in Eugene, but that company insisted all employees submit to a drug test. Of course I refused (as no one’s life would be in my hands in my capacity as cashier), so I was relieved of having to work there. I hadn’t thought about that for a while. Interesting how music can pull memories out like that.

“Town Called Patience,” the album’s title track, is another highlight. I love the folk vibe of this song. Also, the song’s first lines caught me: “I want everything/And you want everything too/And in the end everything turns to dust between us.”  This one was written by Dave Slomin, and the more I listen to this disc, the more I love this particular track. “There is a town called Patience/We missed the exit there/We missed the exit there.” I also really dig “Angel On The Run,” which has more of a rock vibe and was written by David Ashdown. The CD concludes with “In The End,” a song written by Dave Slomin. It has a sweet, pretty feel at times, and that helps make it another standout track. “This time round I’m back again/The worse for wear/A better man.”

CD Track List
Town Called Patience is scheduled to be released on August 26, 2016.
Posted by Michael Doherty at 5:43 PM