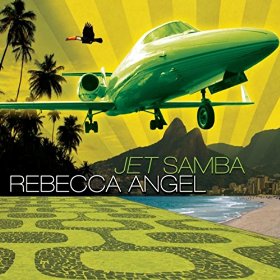 Last autumn, vocalist Rebecca Angel released a holiday single, “My Favorite Time Of The Year,” a song written by her father, Dennis Angel, who also played flugelhorn on the track. She’s now releasing a new single, “Jet Samba,” with her father again joining her on flugelhorn. This tune, however, was written by Brazilian composer Marcos Valle, and was used as the title track to his 2005 release, where it was an instrumental track.

Rebecca Angel’s rendition marks the first time the tune has been recorded with vocals. The lyrics were written by Ronaldo Bastos, and have a bright, happy feel, to match the fun rhythm. “I love when you dress to kill/And you move like a movie star/As soon as you touch my lips/I feel all the things you are.” Rebecca has a natural innocence and youthfulness to her voice (well, she’s, what, twenty years old), which work perfectly with these lines. And before the actual lyrics, Rebecca adds a “la la la” vocal part in place of the horn in the original. This is a sweet, relaxed section before the band kicks in, and she returns to it later, though with more energy then, delivering those vocals more like scat.

There is also a wonderful instrumental section. Rebecca is backed by essentially the same group of musicians who joined her on “My Favorite Time Of The Year”: Jason Miles on keyboard, Dennis Angel on flugelhorn, Gottfried Stoger on flute, Christian Ver Halen on guitar, Adam Dorn on bass, Cyro Baptista on percussion and Brian Dunne on drums. The single was produced and arranged by Jason Miles.

CD Track List
Jet Samba is scheduled to be released on July 25, 2016 on Timeless Grooves Records. Kick off your week with a bright samba.
Posted by Michael Doherty at 5:31 PM