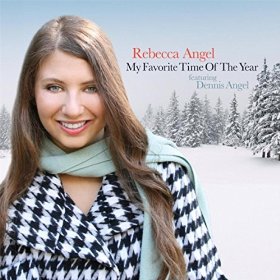 It’s that time of the year again, when the temperature begins to drop, the stores get crowded, and Christmas music seems to be played everywhere you go. Plenty of new Christmas CDs will be released in the next few weeks for those who just can’t get enough of the holiday tunes. Young vocalist Rebecca Angel’s new single, “My Favorite Time Of The Year,” should please those eager to get into the holiday spirit.

“My Favorite Time Of The Year” was written by Rebecca’s father, Dennis Angel, who plays flugelhorn on this track. And actually a different version of this song was released a few years ago by The Dennis Angel Band, that one also featuring a then-fifteen-year-old Rebecca Angel on vocals. That version was included on Smooth Jazz For The Holidays, which was released in 2011. I prefer this new version, which also features Jason Miles on keys, Gottfried Stoger on sax and flute, Christian Ver Halen on guitar, Brian Dunne on drums, Cyro Baptista on percussion and Emily Bindiger on backing vocals. It’s a bright, happy jazz-pop tune, which says basically what you expect it to, with lines like “My favorite time of the year/When love is everywhere/And all you gotta do/Is show someone you really care” and “You don’t need a reason/To enjoy the season” and “The season of giving/Makes life worth living.” It also features a nice smooth jazz instrumental section. (Is it just me, or does that brief “La la la” backing vocal bit remind you of the theme from Mystery Science Theater 3000?)