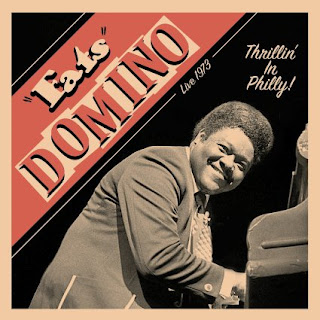 When talking about the absolute best of early rock and roll, one artist that has to be included is Fats Domino. Actually, his name should dominate the conversation. He wrote and recorded a huge number of hit songs in the 1950s and early 1960s, songs like “Walking To New Orleans,” “Ain’t That Shame” and “I Want To Walk You Home.” There is something so happy about his music. I can’t imagine the man frowning, unless it was in jest (even while he sings lines like “I’m not going to kill myself, but I might as well” in “Poor Me” or “Gonna jump overboard and drown” in “Goin’ To The River”). And that joy transfers to the listeners immediately.  Thrillin’ In Philly! Live 1973 is a show Fats performed on November 16, 1973 at the Philadelphia Civic Center. Most (if not all) of these songs will be familiar to you. There are twenty-two tracks on this disc, and Fats has so many hits that a good number of them are not on here (such as “Blue Monday” and “I’m Walkin’”). By the way, the sound is really good on this recording, though we don’t hear the audience between tracks, which is odd. At the end of a tune, the track quickly fades out. This is a fun CD, with excellent musicians, and it will have you smiling and dancing in no time.

The CD opens with an excellent rendition of “Let The Four Winds Blow,” a song Fats Domino wrote with Dave Bartholomew. In addition to great work on piano, there is some wonderful stuff on saxophone. There is a ton of energy here, and then nearly five minutes in, the tune surprisingly becomes this kind of quiet, very cool jam. It’s fantastic, and then of course it kicks in again with wild abandon. It feels like the concert’s closing number, and yet he’s just getting started. Ooo-wee, it must have been something to see him perform.

“Let The Four Winds Blow” is followed by “Blueberry Hill,” which is probably the first song of his I ever heard, when I was really young. Fats didn’t write this one, and several other artists recorded it before he did, but his is the version we all think of when we think of this song. It is still a seriously cool tune. “Please Don’t Leave Me” is a fairly early song in Fats’ career, released in 1953, and is one you might not be as familiar with. It has a wonderful groove, and a nice lead part on saxophone. And as I said, at this show he does those tunes we all know and love, such as “Walking To New Orleans” and “Ain’t That A Shame,” and they sound great. “The Fat Man” is particularly good.

One of my favorites is “I’m In Love Again,” which Fats Domino wrote with Dave Bartholomew. The lyrics to this one always delight me. Here Fats sings, “I need your lovin' and I need it bad/You’re like a dog when he's going mad/Oo-wee, baby, oo-wee/Baby, don’t let your dog bite me.” And this is an extended version. “My Girl Josephine” is also a lot of fun, with a cool instrumental section at the end. This rendition of “I’m Gonna Be A Wheel Someday” is likewise totally enjoyable. Another favorite is “Another Mule,” and this is one I wasn’t all that familiar with. It was written by Dave Bartholomew, and this version includes a nice jam and a great groove.

“When The Saints Go Marching In” fades out before the end of the song, which is a shame. It sounds like it might have kept going for a while. No explanation is offered in the liner notes. Fats Domino also covers Professor Longhair’s “Go To The Mardi Gras” (here titled “Going To Mardi Gras,” and complete with whistling), as well as a couple of Hank Williams tunes – “Your Cheatin’ Heart” and “Jambalaya (On The Bayou).” “Jambalaya” concludes the CD, and it’s a fantastic version, with a nice long jam (this is the longest track of the album, at approximately nine minutes).

CD Track List
Thrillin’ In Philly! Live 1973 was released on CD on October 2, 2015 on Goldenlane Records.

Note: I did a little research, and some folks are saying this show isn’t from November 16, 1973. According to a music set list site, Fats Domino was in playing in New Orleans on that date, not Philadelphia. Someone claims this CD is actually from a show in the 1980s, but doesn’t give a specific date.
Posted by Michael Doherty at 2:59 PM