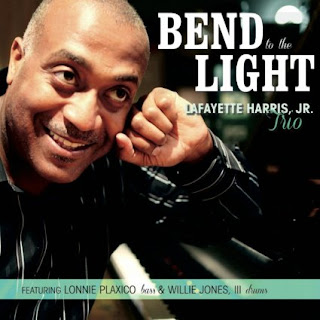 Lafayette Harris, Jr. is a jazz pianist, and his newest CD, Bend To The Light, features mostly original material, though some of these tracks are compositions he had recorded other versions of earlier and is revisiting here. His trio includes Lonnie Plaxico on bass and Willie Jones III on drums.

The album opens with its title track, “Bend To The Light,” a tune which has a very positive feel. It starts off in somewhat mellow, though bright territory, and then becomes a fun tune, especially because of what Lafayette does on piano. There is such a joy here coming from all three musicians. A few minutes in, the track then relaxes a bit for a nice bass lead section. This CD also includes a vocal version of “Bend To The Light,” with Jazzmeia Horn on vocals. There are no lyrics to this tune, just some delightful, playful scat in certain sections. This version is a bit longer than the first rendition.

“Take You Out” is the first of four cover tunes on this CD, this one written by Luther Vandross, Warryn Campbell, Harold Lilly and John Smith. I definitely prefer this instrumental rendition by Lafayette Harris, Jr. It features a light, delightful piano over a good groove. Also, Thomas Dyani adds some great percussion to this track. Yup, it’s much better than the original. The second cover, “12 Bars,” is one of my favorite tracks. It’s just a whole lot of fun, and put me in a fantastic mood.  This arrangement is by Roswell Rudd. The other two covers are the standards “Old Devil Moon” and “Tenderly.”

“We In The House” is a tune that Lafayette Harris, Jr. recorded earlier for his album Lafayette Is Here…Solo. That version is just piano, whereas here it is performed by his trio. The version here is a few minutes longer than that earlier version. I like this tune a lot, but that repeated hook comes straight out of The Association’s “Never My Love.” Right? There is a nice, and fairly lengthy lead on bass approximately halfway through. This CD also includes a shorter version of this tune, sans that wonderful bass section.

“Achern” is a composition that Lafayette Harris, Jr. originally recorded for Happy Together (there it has an exclamation point in its title). That earlier version was done with the trio, though at that time the trio was made up of different musicians – Cecil Brooks on drums and Dwayne Dolphin on bass. This is a seriously good tune, played with energy and joy. It’s followed by the pretty “Japanese Love Poem.” Thomas Dyani’s percussion adds an interesting exotic element, feeling both familiar and unfamiliar, like a familiar emotion in an unfamiliar setting.

“Blues On The Edge” is another of my favorites. Listen to how expressive the bass is, even before the solo. And there’s also a good drum solo too. I had been waiting for one, eager for one, and this one doesn’t disappoint. I love how it sort of continues even when the others join back in. That is some great playing by Willie Jones III. This is a composition that Lafayette Harris, Jr. recorded earlier and released on Trio Talk, with Dwayne Dolphin on bass and Winard Harper on drums. “Geneva” is another favorite. It has great energy right from the start, and I love how that section in the second half is allowed to go on longer than you might expect, with that repeated bit on piano while the drums go wild. It’s seriously great.

CD Track List
Bend To The Light was released on August 7, 2015 on Airmen Records.
Posted by Michael Doherty at 8:19 PM