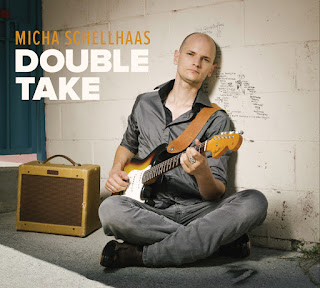 Micha Schellhaas is a seriously skilled guitarist who in 2013 released his first EP, Wings Of Fire. It was produced by guitarist Carl Verheyen (who is known for his work with Supertramp), and featured Chad Wackerman (who was in Frank Zappa’s band in the 1980s) on drums, Dave Marotta (who has played with Bruce Hornsby, Kenny Loggins and Phil Collins) on bass and Jim Cox (who has played with Robben Ford and Neil Diamond) on keys (Jim Cox also played piano on Leonard Cohen’s version of “Always” from The Future – very cool!). Now Micha Schellhaas has released his debut full-length album, with those same musicians helping him out. Titled Double Take, this is a really good instrumental album on which Micha plays blues, rock and jazz, sometimes combining them in interesting ways, other times fully committing to one or another genre, but either way delivering some impressive work on guitar. All of the tracks are originals, written by Micha Schellhaas. In addition to producing, Carl Verheyen also plays guitar on several tracks, providing solos on “Your Turn” and “Texaleans.”

The album opens with “Velocity,” which combines elements of jazz and rock, and features a good groove, and a strong build. It’s followed by “Ford F-150,” a bluesy rock number that has kind of a fun feel to it. I dig Jim Cox’s work on keys, particularly in his lead section. “Double Take,” the album’s title track, is a catchy, groovy, bluesy tune with some excellent guitar work and some strong jazz influences. This is one of my favorite tracks.

My absolute favorite, however, is “False Fork.” Here Micha goes more firmly into the jazz realm, and this track has a very cool vibe, and some wonderful work on guitar, as well as bass. And holy moly, check out what Chad Wackerman does on drums toward the end of the track. Fantastic. That section excites me every time I listen to this disc.

The band then gets back to blues rock with “5&6,” and with a great energy. This track also has something of a cool jam vibe, particularly toward the end. The following track, “Travel Song,” surprisingly has something of a southern rock vibe, and a kind of sweeter sound, which I really like. And I love the way the electric guitar plays over that, making this track another of the CD’s highlights.

“Texaleans” has a fun beat to get you dancing. And then the CD ends with “Slow Blues For B.B.,” a wonderful, relaxed blues number with a good nighttime feel. This features a cool lead part on organ (though it sounds like the snare is vibrating throughout that section), and of course there is plenty of excellent guitar-playing.