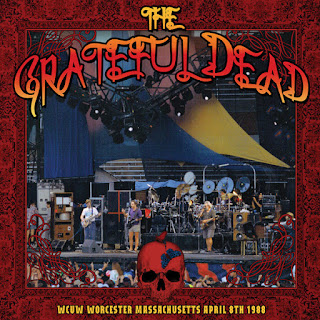 My first Grateful Dead concert was at the Worcester Centrum on April 7, 1988. The next day or so at school, I was handed a tape of the show, and it had all sorts of horrible sound defects, noise that hadn’t been present at the actual show. I never quite knew what the deal was with that cassette, but it might have been taped from the radio. WCUW broadcast all three shows of that run (which turned out to be the final Worcester run, though no one knew that at the time). A lot of radio broadcasts have been popping up lately as unofficial CD releases, and the second night in Worcester, April 8th, has seen such a release. Simply titled WCUW Worcester Massachusetts April 8th 1988, it is a two-disc set containing the entire show.

It opens with some radio banter, mentioning the crowd and asking for donations to the station. I’m not sure I listened to this broadcast at the time. I’m not sure I was even aware that the three nights were being broadcast. But they mention that they’ve worked things out, and say that they hope they’ll have a good-sounding broadcast tonight, which leads me to believe all the sound defects on my tape of the night before were due to problems with the radio broadcast. They seem to be indicating as much. Well, the radio folks stop talking before the show actually gets going. And the band kicks off the night with a version of “Jack Straw” that becomes seriously energetic in the jam toward the end. And the sound is pretty good. They follow that with “West LA Fadeaway,” which is a lot of fun. I sometimes forget how good this song can be. After a pause as the band presumably decides what to do next, they go in a bluesy direction with “Little Red Rooster.” But that doesn’t mean things are about to get mellow. Brent certainly isn’t about to let that happen, not yet. And the crowd howls like the hounds Bob sings of.

The first set also includes good versions of “Stagger Lee” and Bob Dylan’s “Queen Jane Approximately” (the latter seeming to end somewhat abruptly), and then ends with a passionate, if somewhat rough “Loser” leading straight into “Let It Grow.” Bob then tells the crowd they’ll be back in a little bit. The first disc ends with a bit more radio banter, but they do not interrupt the music at all, not to do station identification or anything, not even during tuning between songs. There’s just the bit at the beginning and now at the end of the set.

I should have been at this show, but at that point in my life I hadn’t ever been to two concerts in a row. In fact, at that time the only band I had seen more than once was Aerosmith (I saw them in 1986, and again in 1987), and I just don’t think it occurred to me to get tickets to more than one show. I was thrilled just to be at one. That one show certainly changed things for me, and my expectations for live shows were raised significantly higher than they had been (many bands would not meet these new expectations).

The second disc begins with just a bit of radio banter. “See you on the other side.” Oh yes. It sounds like an “Iko Iko” tease or something before they settle on “Playing In The Band,” which of course gets the crowd excited. It’s a bit messy at points, but is still a great way to get the second set started. It’s an incomplete “Playing,” suddenly giving way to “Crazy Fingers.” The following year, my second Grateful Dead show would open with this pairing of “Playing” into “Crazy Fingers,” and we’re talking first set. “Gone are the days we stopped to decide/Where we should go, we just ride.” Though Jerry’s voice struggles a bit, this is a really good version, with a beautiful ending.

That leads to “Uncle John’s Band,” with a good jam that features an odd electronic sound a few times. There is also a bit of a “Playing In The Band” tease, as if the band might finish that song. But instead the jam leads into the “Drums/Space” segment. “Space” is short, and it leads to a strange, interesting version of “The Other One,” one of the show’s highlights. Though this is fairly short too, and soon gives way to “Black Peter,” a song that Jerry had sung the previous night too. They didn’t often play the same song two nights in a row, but Jerry wasn’t feeling all that good at these shows, and this song might have spoken to him particularly because of that. Or maybe he just forgot. The band then wraps up the second set with “Turn On Your Lovelight.”

The encore is “Black Muddy River,” a pretty song that I don’t think I ever got to see the Dead perform live. There is just a bit of radio banter right at the very end of the disc. It’s a short show. The second disc, which contains the entire second set and encore, is only sixty-four minutes.

Disc 1
Disc 2
WCUW Worcester Massachusetts April 8th 1988 was released on September 15, 2014 through Klondike Records. By the way, the photo on the CD cover is not from this show, or even from this venue.
Posted by Michael Doherty at 11:20 PM