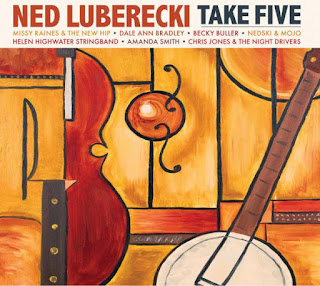 The current political and social landscape is disgusting and depressing, but one thing I’ve learned is that it’s difficult to remain depressed when you can hear the sound of a banjo. It’s such a light, happy sound, a sound that says, “Come over here and let’s be friends.” So yes, it’s a sound that I’m turning to today to lift my spirits and remind me that this presidential horror is a passing thing. Ned Luberecki is an accomplished banjo player who plays with The Becky Buller Band and in the duo Nedski & Mojo. On his new CD, Take Five, he presents some traditional banjo and fiddle tunes, as well as some not-so-traditional songs. Yeah, there are some real surprises on here. Also, there is some original material. Most of the tracks are instrumentals, but vocalists join him on certain tunes.

Ned Luberecki kicks off the CD with an original instrumental tune, “Night Driver,” which features Chris Jones on guitar, Mark Stoffel on mandolin, Jon Weisberger on bass and Jeremy Garrett on fiddle. This is a lively bluegrass number to get things off to a good start. It’s followed by “Higher Ground,” which features Dale Ann Bradley on lead vocals, with Becky Buller on harmony vocals. It was written by Kelley Luberecki and Dale Ann Bradley. Here is a taste of the lyrics: “Other places I’ve seen have taught me many things/Some of them I’ve tried to call my home/No matter where I dwell/I come back to the well/As higher ground, my mountain stands alone.”

Becky Buller then joins Ned on fiddle for “Cleveland Park,” an instrumental with a mellower, more serious vibe. This is a duet of banjo and fiddle. Things then kick back into that high gear with a great cover of “Adams County Breakdown,” a fun, breezy instrumental number written by Tom Adams and recorded by The Lynn Morris Band. On this track, Ned Luberecki is joined by Shad Cobb on fiddle, Mike Compton on mandolin, David Grier on guitar, Missy Raines on bass and Rob Ickes on dobro, and all the musicians gets a chance to shine in traditional bluegrass style.

Amanda Smith provides lead vocals on “We’ll Put Out The Fire,” a sweet dance number. “He’s the one, the one for me/All that I desire/I’ve been waiting/When he comes/We’ll put out the fire.” That’s followed by “B-Flat Medley,” one of my favorites, a fun little instrumental number with some cool changes. And then “Fiddlin’ Dan,” another favorite, follows, this one featuring Becky Buller on both vocals and fiddle. I love songs with that great Irish folk feel. (Hey, St. Paddy’s Day will be here before we know it.)

But probably my favorite track on this disc is its title track, “Take Five.” Oh yes, this is absolutely fantastic. Banjo jazz. “Take Five” is already one of my favorite tunes anyway, written by Paul Desmond, and made famous by Dave Brubeck’s original recording. By the way, the cover artwork for this CD reminds me of the artwork for Time Out, the 1959 Dave Brubeck Quartet album to feature “Take Five.” I could listen to this track for hours, just as I could spend hours listening to Dave Brubeck’s rendition (and have done, actually). Joining Ned Luberecki on this track are Missy Raines on bass, Ethan Ballinger on guitar, Casey Campbell on mandolin and Cody Martin on drums. And that remains the band’s lineup for the next several tracks.

After “Take Five,” the group dips into bossa nova with an instrumental version of Antonio Carlos Jobim’s “Girl From Ipanema,” then follows that with a good original tune, “Earl’s Court,” written by Ned Luberecki. One of the other main highlights of this CD, however, is another jazz cover, an absolutely delightful rendition of “Blue Monk.” It has kind of a laid back country jazz feel that is wonderful, and I love Ethan Ballinger’s work on guitar. It also includes a cool bass solo by Missy Raines. I definitely recommend checking it out.

“Kitchen Squirrel Medley” is another instrumental with just banjo and fiddle. That’s Becky Buller on fiddle there. That’s followed by “Buck Owens Medley,” the only track on this disc to feature male vocals. That’s Stephen Mougin on vocals and guitar (he’s the other half of the duo Nedski & Mojo). The medley includes “Before You Go” and “Let The World Keep On Turnin’.” The CD then concludes with perhaps its biggest surprise, the Star Trek theme, including the voice-over narration (that’s Ned Luberecki doing the narration). Yup, we’re boldly going where no man has gone before, and with a banjo this time.

CD Track List
Take Five is scheduled to be released on March 31, 2017.
Posted by Michael Doherty at 4:08 PM