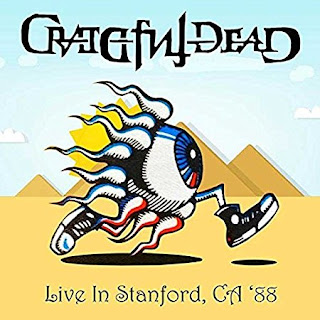 Perhaps it’s because the present fills us with dread, but, whatever the reason, I’ve been reaching back to earlier years, and specifically to 1988 this week. I listened to a Grateful Dead show from April 8th at the Worcester Centrum, and am following that up with another Grateful Dead show from that same month, but at the other end of the country. Live In Stanford, CA ’88 contains nearly the complete show the Grateful Dead did on April 30, 1988 at the Frost Amphitheatre in Stanford, California (it’s missing part of one song from the second set). This is another of those releases based on a radio broadcast, this time from KZSU, but this one contains no audio indication of such. We never hear anyone from the station introduce or interrupt the music. There are no station identifications whatsoever.

There are some sound issues at the start of the first disc, but they’re quickly settled as the band launches into a sweet version of “Let The Good Times Roll.” “It might be six o’clock and it might be eight/It doesn’t matter if it’s getting late.” The band then goes right into “Feel Like A Stranger,” featuring a good jam with a groove that has me dancing. A somewhat pretty “Row Jimmy” follows, and then Bobby dips into the blues with “Walkin’ Blues,” with Brent delivering some interesting stuff on keys. There’s a pause after that, while the band chooses its next song. “Next tune is a drummer’s choice,” Bobby announces, and the band goes into “Hey Pocky Way,” with Brent on lead vocals. I recently read Bill Kreutzmann’s memoir, Deal, and in it he does mention his love for New Orleans-flavored music, and “Hey Pocky Way” certainly fits the bill. It’s a fun song, and Brent, of course, delivers the vocals with a palpable energy. The beat should have you on your feet immediately. Ah yes, have a little post-apocalyptic dance party right in your living room, or wherever you might be listening. The band keeps the good vibes going with “Ramble On Rose,” and then concludes the first set with “Let It Grow,” which feels a bit rushed. Right? The pace seems faster than usual, and the jam also has a kind of intense feel to it.

The first disc also contains the beginning of the second set, which kicks off with “Shakedown Street.” As always, I dig the vocal jam toward the end, though this time that section of the song is relatively brief. But the jam continues after that part, and then, surprise, they go back into a bit of the vocal jam. Sure, it’s short, but it’s great, and the band then goes into “Man Smart, Woman Smarter,” a song that seems just perfect these days, and the tune which ends the first disc.

The second disc then picks up where the first disc left off, with “Ship Of Fools” followed by “Playing In The Band.” This isn’t a complete “Playing,” and the jam leads to the “Drums/Space” segment. Contrary to what the CD case indicates, “Drums/Space” is presented as a single track, the third track of the disc. This is a pretty wild “Space,” like a group of dosed whales making contact with the outer reaches of our galaxy, or at least trying. It seems they’re successful, the answer coming from a distance in the form of “Going Down The Road Feeling Bad,” which eases in and then is suddenly there, a bright, happy force. And here we go. For me, this part of the show is one of its highlights.

Bobby sings Dylan’s “All Along The Watchtower,” and then that’s where I expected there to be a song missing. After all, it’s not listed on the CD case. But “Black Peter” is there, though a large chunk of it (approximately five minutes) is cut. It’s the only major glitch of this disc. The Grateful Dead wrap up the second set with “Sugar Magnolia.”

It is rare (at that time, anyway) for the Dead to play more than one song in the encore, and at this show they play three songs. They do “China Cat Sunflower” into “I Know You Rider.” When they start “China Cat,” the crowd understandably goes a little nuts. But the band isn’t done even after an excellent “I Know You Rider.” After all, this show was on a Saturday, and you couldn’t escape a Saturday show without hearing “One More Saturday Night.” In 1995, I was working on designing a T-shirt. On the front was to be a close-up of Jerry’s face, with his index finger over his lips, indicating Sshh, and on the back it was going to say, “Don’t tell Bob it’s Saturday.” I think that would have sold, and I would have given one to Bobby – I’m pretty sure he’d appreciate the joke. Anyway, the band ends the show with a high-energy rendition of “One More Saturday Night.”