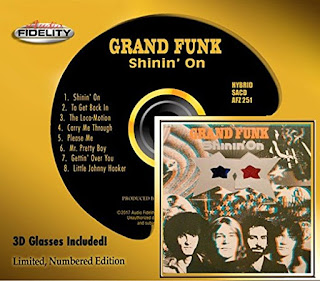 Audio Fidelity continues its series of limited edition SACD releases with the 1974 Grand Funk Railroad album, Shinin’ On. The original vinyl release sported a cover that was in 3D, and included a pair of 3D glasses. This special limited edition release includes that original 3D artwork and glasses. Following 1973’s We’re An American Band, Shinin’ On features Grand Funk Railroad’s number one hit version of “The Loco-Motion,” a song written by Gerry Goffin and Carole King, and the album itself reached number five on the charts. It was produced by Todd Rundgren, who had also produced We’re An American Band. Rundgren plays guitar on one track – “Carry Me Through.” This is some really good mid-1970s rock music to get you moving, and is a good way to escape the current political horror show.

It opens with its title track, a song that was popular enough to be included on the Best Of cassette compilation I owned in the 1980s. “Shinin’ On” has a good groove, and the band jams on it, letting loose a bit in the middle of the track. I particularly dig the work on keys. By the way, Grand Funk Railroad is made up of Mark Farner on vocals, guitar, harmonica and organ; Don Brewer on drums and vocals; Mal Schacher on bass; and Craig Frost on vocals, organ, clavinet, piano, Moog and Mellotrone. “Shinin’ On” is followed by “To Get Back In,” which has something of a brighter, fun sound. Here is a taste of the lyrics: “But there’s a question standing where I stood/You know you act just like the person that’s been lied to/You ain’t been treating me like you know you should/There’s been a change in your way/Remember what it's like when love is good/And remember the chorus 'cause I wrote it for us.” There is some jamming on this one too toward the end of the track, with more cool work on keys.

“The Loco-Motion” is the big hit from Shinin’ On, and is actually the only cover song on the album. It was originally recorded by Little Eva, who also had a number one hit with it (hers in 1962). This is also the shortest song on the Shinin’ On album, without any extended jamming. It’s one of those innocent dance numbers, with lines like “My little baby sister can do it with ease/It’s easy as learning your ABCs/So come on, come on and do the loco-motion with me.” “Please Me” is a good rock and roll tune written by Mark Farner and Don Brewer. Here is a taste of the lyrics: “Too many times, I've seen them abuse her/Just like the times I've been deceived/The touch of her starlight makes me happy/I can see her shining through in my dreams/And I wake up crying.” And that little line tossed in at the end made me laugh out loud: “And suck it.”

“Mr. Pretty Boy” is a slower, bluesy tune. It’s followed by a lively, high-energy rock and roll song titled “Gettin’ Over You,” which begins with a good groove on drums. And the instrumental section in the second half of the song is totally enjoyable. Turn this one up and get lost in its great 1970s rock vibes. This is one of my personal favorites.

CD Track List
This limited, numbered edition of Shinin’ On was released on January 27, 2017. I am not sure how many copies were issued, but mine is number 0274.
Posted by Michael Doherty at 5:01 PM