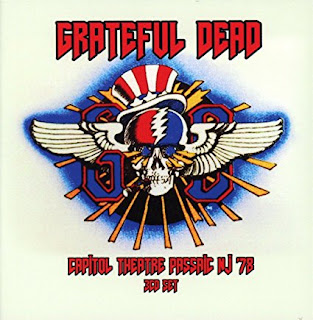 There are suddenly a lot of these concert radio broadcasts seeing unofficial CD releases. I’m not sure exactly why that is, but I am happy to take whatever Grateful Dead I can get, particularly these days when I want to escape to a better time. And really, there was no better time than a Grateful Dead concert. Capitol Theatre Passaic NJ ’78 is a three-disc set containing nearly the entire concert the Grateful Dead performed on November 24, 1978 (it is missing one song from the first set). The show was broadcast on WNEW, and apparently some interviews with band members were included in the original broadcast, though those are not included here. This three-disc set does include a booklet with notes from the original concert program.

The first disc starts with a radio introduction which actually ends up going over the band introduction from the stage. Then the band opens with “Jack Straw,” with Donna Jean’s vocals fairly prominent in the mix at the beginning. Bob tells the crowd the band is going to take a moment to adjust things, “And take pause to wonder what we’re doing here.” And they go into “Sugaree,” which the crowd welcomes with a whole lot of cheering and applause. Jerry’s voice is straining a bit, but this is still a really good version. That’s followed by “Me And My Uncle” going straight into “Big River,” with Keith providing some nice stuff on keys.

Bob addresses the radio audience: “And a big hello to all you radio listeners who are listening out there. We certainly hope you’re enjoying the show as much as we are. I just wish they’d get these elephants off the stage.” Jerry’s voice strains again during “Stagger Lee,” a song included on Shakedown Street, which was released just before this concert. Jerry was sick during the show, and the next show was actually canceled due to his illness. Bob then jokes with the radio audience again before the band goes into “Passenger,” a song the Dead played for only a few years. It has a bit of an awkward ending.

After a nice “Candyman,” Bob says they’re going to take a little break for the radio stations to identify themselves, and we do hear a brief radio announcement. Bob then jokes about deciding what they want to do next. And what we hear is “From The Heart Of Me,” a song featuring Donna Jean Godchaux on lead vocals. This song was also included on Shakedown Street. But what’s missing here is “New Minglewood Blues,” which the band played before “From The Heart Of Me.” It’s unclear why it’s not included. It’s not due to time constraints, because this first disc is only an hour long. Interestingly, this very version of “New Minglewood Blues” was included on the extended version of Shakedown Street released more than a decade ago, so if you have that, then you have the complete show.

The second disc then starts with the final two songs of the first set – a good version of “Loser” followed by “Promised Land.” And then at the start of the second set, Bob again addresses the radio listeners before the band launches into “I Need A Miracle,” which I believe is the first Grateful Dead song I ever heard. I remember it got airplay on the local rock station at the time, and specifically I recall hearing it on the school bus radio on my way home from school when I was really young. Of course, I had no idea that it was the Grateful Dead. I just really liked the song, and still do. That leads straight to a fun cover of “Good Lovin’,” a song which the Dead included on Shakedown Street. Actually, the Dead played most of the songs from Shakedown Street at this show, the only exceptions being “France,” “Serengetti” and “If I Had The World To Give.” Bob mentions the presence of cameras (the show was filmed as well as broadcast on radio), and the band goes into a really nice rendition of “Friend Of The Devil,” which is the final song of the second disc.

The third disc contains the rest of the second set and the encore. There is a brief radio announcement as the band tunes for “Estimated Prophet.” “Estimated” is, for me, one of the highlights of the show, with a good jam. This is where things start getting interesting, and the jam leads into “Shakedown Street,” which gets a little wild and messy toward the end, but has me dancing around. The drum solo follows, and then Hamza El Din joins them for “Ollin Arageed.” Just a couple of months before this show, the Dead performed in Egypt, where they were joined on stage by Hamza El Din. They performed this song at each of those three shows by the pyramids. Hamza El Din then joined the Dead in the U.S. a few times for this song. The Dead follow that with “Fire On The Mountain.” Jerry’s voice again strains, but it’s still a good version, and it leads directly to “Sugar Magnolia” to close out the second set. The encore is Chuck Berry’s “Johnny B. Goode.”