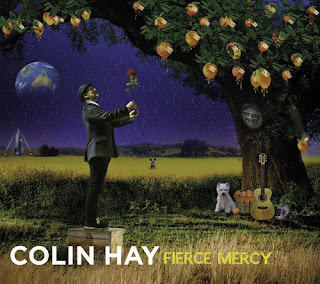 When I was a kid, my friend across the street had a serious crush on Colin Hay, and I could trade her photos of Men At Work (taken from rock magazines) for just about anything she had. I think mainly I traded for photos of Madonna. Things were fairly simple when we were twelve years old. Remember that, Sandy? Well, we’ve all done a bit of changing since then, I suppose, and now, in the process of taking stock, we look back from time to time. Colin Hay does some looking back too, on certain tracks of his new album, Fierce Mercy, though mainly these songs seem to look forward to a better, more positive time. This is a sweet, beautiful album with excellent lyrics that are warm, thoughtful, engaging, and help us put things from our own lives into perspective.

The CD’s first track, “Come Tumblin’ Down,” had me smiling almost immediately, though its opening lines are “I dropped a coin in the wishing well/But it’s a long time dry.” You get the feeling from listening to this song that there is still a damn good chance that wish will come true, whatever state of decay things are in. There is a bit of a country vibe to this bright and fun song. Check out these lines: “And there’s a child sitting on the stairs/She’s seen everything there is to see/And somehow she still cares.” I love that. “Let’s just keep on dancing/Until it all comes tumblin’ down.” Sounds like a good plan to me. See what I mean? You can’t help but feel better, you can’t help but regain at least a bit of your optimism listening to this song. And I love hearing Colin raise his voice on the chorus. This song was written by Colin Hay and Michael Georgiades, both of whom play acoustic guitars on this track. Jeff Babko is on accordion, and Alison Brown plays banjo on this one, and those instruments certainly add to the positive feel of the song.

That’s followed by “Secret Love,” which features an excellent and powerful vocal performance by Colin Hay. “I tried walking away my fear/I tried to make it disappear/It follows and shadows me everywhere/Sometimes I wish I didn’t care/But I’m not a pretender/I have to surrender to my/Secret love, secret love.” Cecilia Noel and Charissa Nielsen provide backing vocals on this track. Fred Kron is on keys and provides the string arrangements. “A Thousand Million Reasons” has a sweet and pretty sound, but its opening lines still make laugh: “When the sun comes up over Paris/It’s like any other day/Except that you’re in Paris/What more need I say.” I just find those lines delightful.

One of the most emotionally engaging songs is “Frozen Fields Of Snow,” about a soldier returning to his childhood home, perhaps the last living member of his family, and perhaps at the end of his own life. “I was born some time ago/In this very room/There’s many who have come and gone/There may be one more soon.” This song creates a vivid portrait, and does so gently. That one is followed by “The Last To Know,” the song that provides the CD with its title, in the lines, “It was fierce mercy/Telling me to take it slow/Or I’ll be the last to know.” Actually, the phrase “fierce mercy” is repeated several times throughout the song. One of my favorite tracks is “I’m Going To Get You Stoned.” Something about the entire feel of this song is incredibly appealing. “And I’m going to get you stoned/Like it’s 1967/I’m going to get you stoned/When here on earth it felt like heaven.” The lines from this song that always stand out for me are these: “We’re all doin’ time/I can hear it tickin’ when I’m talkin’/Not living is the crime/I squeeze it each and every day.”

“I’m Walking Here” is the oddest track on this album. Its title, I’m guessing, is a reference to a famous moment from Midnight Cowboy when a taxi almost hits Ratso (Dustin Hoffman), and in response he hits the hood of the car, saying, “I’m walking here, I’m walking here” (a line repeated in this song). This track also features rap vocals by Joe Manuel Lopez, who co-wrote the song with Colin Hay, Cecilia Noel and Jonathan Eric Piazza. The song was inspired by news of the killing of Trayvon Martin. Despite the song’s serious subject matter, it features a good groove. That’s followed by “Two Friends,” the only song on the album that wasn’t written or co-written by Colin Hay. Michael Georgiades wrote it. This one too has a serious subject, and the lines that hit me the first time I listened it are, “They’ll go on in memory/And we’ll go on in time.”

“I’m Inside Outside In” has a fun, positive, catchy pop feel which is impossible to resist. And I love lines like, “Small gains that I am making/Become such an undertaking” and “One day I’m almost certain/The day next day I draw the curtain.” We can all relate to these lyrics, eh? “And if I fall, who would miss me/And who can I find to forgive me.”

CD Track List
Fierce Mercy is scheduled to be released on March 3, 2017 through Lazy Eye Records and Compass Records.
Posted by Michael Doherty at 6:14 PM