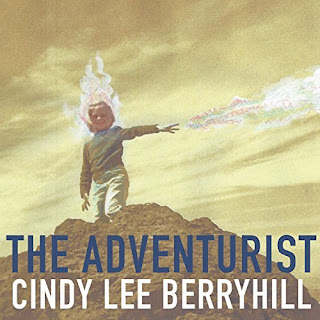 Like most of you, I’ve been fighting depression since the election. The best weapon against this despair has been music. And there have been quite a few excellent songs ridiculing the so-called president. But one woman was well ahead of the game. Cindy Lee Berryhill released her song “Trump” in 1989 on her Naked Movie Star album. Check out these lines: “I pledge allegiance to a man/Of United States of Amer-i-can/To the suffering on which he stands/One man by God/An individual/With money and compassion for the rest.” Again, that was in 1989. Well, this prognosticator has a new CD coming out. Titled The Adventurist, this is her first new release in approximately a decade. The album is dedicated to the memory of Paul S. Williams, to whom she was married.

This CD opens with “American Cinematography,” a strange, yet delightful tune. It’s a bit of folk, bit of pop, bit of rock, but a whole lot of wonderful. Yes, part of that is the presence of the cello, an instrument I always appreciate. That’s Renata Bratt on cello. Renata also plays on the following track, “Somebody’s Angel,” which is one of my personal favorites. And sure, it’s a serious situation, but something about the line “They did their best, it’s no one’s fault the surgery didn’t take” makes me laugh. But this is a beautiful and passionate song about carrying on after the death of a spouse. “But I know you’d still want me to be happy now/The first time I kissed somebody new/I cried when I thought about you.” This line also stands out: “But I’m still young enough to want someone to hold through the night.” Ah, do we ever stop wanting that? I hope not. Christopher Vitas plays violin on this track. This is a song that I love more each time I listen to it.

Another of this disc’s highlights is its title track, “The Adventurist.” The strings play a prominent role in this one, setting the tone for this tale, which features an unusual combination of sounds, an unusual combination of instruments, mixing strings with vibraphone and marimba. That’s Renata Bratt on cello again, and Ben Blechman on violin. DJ Bonebrake (yes, of X) is on marimba, and Paula Luber is on vibraphone. “Meanwhile back at the ranch/Our protagonist is taking out cash/For a journey far from her home/While the adventurist is hunting big game/With an AK-47 cell phone/And a Jeep Cherokee playing lounge love songs.” DJ Bonebrake also plays marimba on “Thanks Again,” another strange tune. But of course by now odd is what I expect. It begins with a bit of spoken word – “We can see what’s ours/What we’ve inherited, and what this crazy is coming to” – and then soon she sings, “Thanks again for doing me in.” What, a song of cosmic doom and rebirth?

“Horsepower” is a fun tune. It has a sort of false ending, then becomes an interesting little jam at the end. “I Like Cats/You Like Dogs” has something of a chipper sound, but there is something unhinged, a little off, and it’s not long before it is clear what it is: she sings, “I like cats, I like cats.” Enough said, right?  Check out these lines from “The Heavy: “Volcanoes erupt when you come around/Your name comes up and all the crap goes down/You play the heavy.” And yet the song has a light, kind of pretty tone. DJ Bonebrake plays marimba and vibraphone on this one, Paula Luber is on glockenspiel, Renata plays cello, and Ben Blechman is on violin.

“An Affair Of The Heart” is a beautiful love song featuring Renata Bratt on cello, Glen Campbell on cello and Christopher Vitas on violin. Ben Campbell plays bass on this track. “You can’t fight the feeling/Like a mountain on fire starts with a spark/Not a matter of reason, an affair of the heart.” Cindy Lee Berryhill then concludes the CD with “Deep Sea Dishing,” an instrumental tune featuring the sound of a dishwasher (and obviously a play on “Deep Sea Fishing,” in which you can also hear that machine at the beginning).

CD Track List
The Adventurist is scheduled to be released on March 10, 2017 through Omnivore Recordings.
Posted by Michael Doherty at 4:06 PM