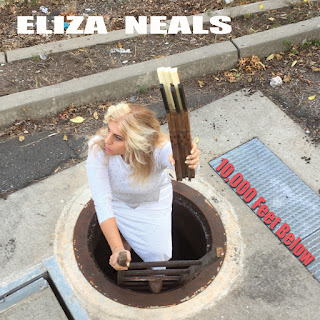 Most of the country has the blues right now, so why not listen to some good blues? Blues are designed to lift our spirits by getting all that negativity out of our systems, defeat our sorrow by voicing it. And what a perfect voice for the task is the one possessed by Eliza Neals. Raw, rough, emotional, ready to throttle our troubles, tear out their throats, chew on their corpses, then kick them aside to let something brighter enter. It’s a big job, especially these days, but it seems Eliza Neals is made for this. Just look at her on the cover, ready to descend to the depths and do battle with whatever creatures might dwell down there. Or is she emerging unscathed and clean, having already defeated the monsters with her voice alone? Leave that up to you to decide. I’m just digging the new CD, 10,000 Feet Below, which features mostly original material. Eliza, in addition to providing that great voice, plays piano, organ and tambourine on this release. Her band includes Howard Glazer on guitar, John Abraham on bass and Demarcus Sumter on drums. And on this CD, she is joined by some other talented musicians, folks like Paul Nelson, Billy Davis, Skeeto Valdez, Paul Randolph and Kenny Bradford.

Eliza Neals kicks off the new CD with a very cool original tune, “Cleotus.” This one has something of a loose, back porch feel. And right away she shows she’s not a woman to be messed with, singing, “I slapped his face, I said shame on you/Now get back in the car, that’s what you got to do.” That’s followed by “Another Lifetime,” a great, tough blues tune she wrote with Howard Glazer. “You walked in the room/And my heart trembled, trembled/You kissed my lips/My lips, my lips/And my soul remembered/Another place so hard to find/Maybe another lifetime.” There is something sexy about her delivery. She reminds me a bit of Kelly Zirbes (of Kelly’s Lot). Her vocals have that same power and emotion, and she seems just as willing to risk everything, to really go for it at every moment and see what happens. Not just see what happens, but accept what happens, embrace it and then let it go. There is also something of Screamin’ Jay Hawkins here, maybe a similar soul, who knows. Just listen to her toward the end of this track, and you’ll see what I mean. Maybe it’s the say she sings the word “mine” in the line “Gotta make you mine,” like we have absolutely no choice in the matter. Oh yes!

The title track, “10,000 Feet Below,” begins with a steady pounding, and Eliza sings, “I just got back from hell/And the devil was scared of me/I just got back from hell/And I stomped him with my feet.” I have no doubt about it, and that pounding makes me feel like she’s ready to stomp anyone else who crosses her path, that she’s not done. And the masochist in me wants to cross her path right now. And I love that guitar part halfway through. This is one of my favorite tracks. Eliza begins “You Ain’t My Dog No More” a cappella. So delicious. Then when the band comes in, it takes on a heavy, standard blues rhythm. And she stutters “B-b-b-baby” like George Thorogood singing “B-b-b-bad.” Brian Clune plays drums on this one.

For “Cold Cold Night,” Eliza Neals has a different group of musicians backing her, including Paul Nelson (from Johnny Winter’s band) on guitar, Lenny Bradford (from Joe Louis Walker’s band and Entrain) on bass, and John Medeiros on drums. This is a cool, emotionally charged tune, and I’m particularly fond of Paul Nelson’s work on guitar. That’s followed by the album’s one cover, a good rendition of Skip James’ “Hard Time Killing Floor Blues,” here simply titled “Hard Killing Floor.” Eliza’s vocal performance is seriously impressive, and the guitar is so expressive.

In “Downhill On A Rocket,” Eliza sings, “I’m a voodoo woman with a cross in my hand.” That sounds just about right, and I don’t think it will be long before she has you under her spell. She also sings, “Swimming in a swamp filled with crocodiles,” and I can’t help but think we’re all in it now. The so-called president promised to “drain the swamp,” but instead he’s dragged the entire nation into his ever-growing mire, which he has filled with a collection of horrid beasts that can bite but can’t speak. Well, hell, Eliza defeated the devil. Surely she can take on that prick and his regime. And in the next song, “Merle Dixon,” she sings, “I don’t like what you’re saying/Shut your mouth.” It’s difficult these days to separate our dire political situation from… well, from anything. And hearing these lines, I immediately think of Donald Trump and want to sing those lines to him. Oh, when will he shut up? But of course, this song is not about that guy. It’s about, I assume, a character from The Walking Dead. Merle Dixon was played by Michael Rooker, who famously played the lead role in Henry: Portrait Of A Serial Killer.

Eliza Neals concludes her new album with “At The Crossroads,” a slower, more haunting number that features Billy Davis on guitar. And even with such a phenomenal guitarist, I do like that the piano remains at this song’s base. The song trails off at the end like a descent into a fiery pit. We’re not out of this one yet, folks. Not by a long shot. So just start this album over again.