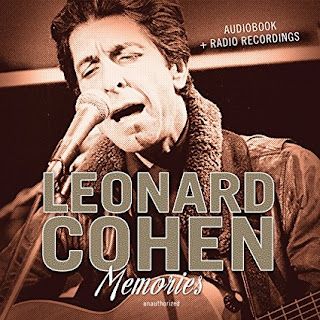 In the last few months, several unauthorized Leonard Cohen CDs have been released. Most of these are concert recordings that were originally broadcast on one radio station or another, and they are of varying sound quality. The latest unauthorized release, Memories, is something different. It contains snippets of interviews as well as a few songs that were recorded live at different shows. The main problem with this release is its lack of information about the tracks. The most we’re given about any individual track is the year in which it was recorded, but I’m not sure whether to even trust that bit of information (particularly as “Hallelujah” is misspelled as “Halleluja” on the back of the case). And there is one track on here that is another artist covering one of Leonard Cohen’s most famous compositions, and the artist is not even identified. My guess is that is to keep from having to pay her. The disc is only thirty minutes long, and will probably be of interest only to those Leonard Cohen fans like myself who want to own everything.

It opens with a sort of collection of Leonard Cohen’s thoughts about the song “Hallelujah,” apparently from three different sources. The first is from a live performance in which he introduces the song: “I don’t know the answers to anything. I just come here to sing you these songs that have been inspired by something that I hope is deeper and bigger than myself.” The other two sources are interviews with Leonard Cohen. In the first, he talks about his early version of the song, which he says he wrote five or six years before the interview. And in the second, he talks about the word “Hallelujah.” The live performance and the interviews are not identified even by year on the CD case. That’s followed by a cover of “Hallelujah” by a female vocalist who is not identified at all on the CD. On the back of the case, it simply says, “Tribute.” It’s actually an incredibly pretty rendition, with just vocals and guitar, and featuring Leonard Cohen’s more recent lyrics rather than those in the Various Positions version.

The CD includes a live version of “Tower Of Song,” though again the date and venue aren’t identified. Leonard laughs after “But I hear him coughing,” and gives a funny delivery of the “golden voice” line, which gets both a laugh and a cheer from the audience. Partway through the song, suddenly there is a very brief snippet from an interview with Leonard Cohen, which is weird. There is a hiss on this track, and the song fades out abruptly. That’s followed by a live version of “Suzanne,” but again it is not known the date or venue of the show. That being said, it’s a really nice version. Leonard sings “lonesome wooden tower” rather than “lonely wooden tower.”

“My Guitar Is Come Home” is a snippet from a concert, in which he introduces “Chelsea Hotel No. 2,” without identifying the woman who is the song’s subject. He says: “And there were many casualties, some famous ones, and some obscure ones. And this song is for a great singer who I once knew when she used to live at the Chelsea Hotel in New York City.” And the track then includes part of the song. It’s cut after “and all of that jiving around.” I wish the entire song were included. I was curious why the track was titled “My Guitar Is Come Home,” and after a little searching I discovered this track is from a show in Barcelona in 1974, and in the full introduction to the song Leonard Cohen says: “For me, it is very special to be here in Spain. I want to thank you all for paying attention to my songs, and for giving me this opportunity to come here. I’ve played a Spanish guitar all my life, and for me this is as though my guitar has come home.” By the way, I listened to that recording multiple times, and I’m certain Leonard says “has come home,” not “is come home.” Yet the person who posted the recording titled it “My Guitar Is Come Home,” and so that must be where the makers of this CD got the title. But again, that part of the introduction isn’t included on this disc, so why use that title?

The next couple of tracks are snippets from interviews, the first identified as being from 1980, in which he talks about his work, about touring. “I think I’ll always play my guitar and, you know, I’ll always be interested in some kind of little expressions of my heart.” The interviewer’s questions are mostly cut. This thought might make those of us struggling creatively feel better about the struggle: “I know from my own experience I can work, I can go to my desk every day for a year and nothing happens, you know, whereas sometimes just a waitress handing me a sandwich can just touch me very, very deeply and suddenly everything will open up, the heart will open up.” The second snippet is identified as an interview from 1976, and in this one he talks about the commercialization of life.

The final two tracks are concert recordings. The first is a live version of one of my favorite Leonard Cohen songs, “Coming Back To You.” This is a really good version, and in it Leonard sings “a thousand miles of silence” rather than “another mile of silence.” This track is one of the disc’s highlights. That’s followed by a live version of “Hey, That’s No Way To Say Goodbye” from 1972 (according to the CD case). This is an oddly short version without the return to the first verse.