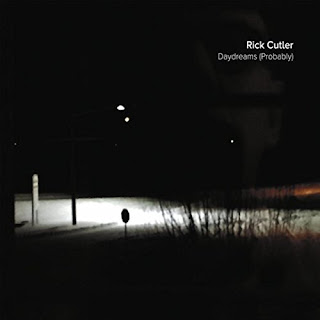 Daydreams (Probably), the new CD from accomplished musician Rick Cutler, features mostly solo piano pieces, but also some tracks where he plays drums as well. There are also several brief drum solos throughout the album. The drums were the first instrument he learned as a child, before moving to piano. He studied piano with Chick Corea, and has played with many excellent artists over the years. This CD contains mostly original material, but Rick Cutler also includes a few covers on this release, joined for two of those songs by female vocalists. Rick Cutler plays all instruments on this album.

Daydreams (Probably) opens with one of the very brief drum solos. Titled “Amuse Bouche 1,” it’s actually just cymbals, and lasts for less than thirty seconds. He then goes into a somewhat whimsical and pretty piano solo titled “Overalls.” “The Tall Road” then features Rick Cutler on both piano and drums. This tune has a relaxed groove, but with a delightful jazzy feel, and is followed by another drum solo, “Amuse Bouche 2.” Yes, as you might have gathered by now, each of the drum solos is titled “Amuse Bouche.”

The first of the album’s covers is a rendition of Stevie Wonder’s “Black Orchid,” a song from his 1979 record Journey Through The Secret Life Of Plants, which was the soundtrack to the documentary film The Secret Life Of Plants, which was based on the book of the same name. This song is certainly not as familiar as much of Stevie Wonder’s other work, but it has a certain beauty. This rendition by Rick Cutler features Branice McKenzie on vocals, and it’s a good version. That is followed by “When I Found You Again,” a more contemplative solo piano piece. There is something relaxing and quietly beautiful about this track, and it’s one of my favorites of this album.

“When I Found You Again” is followed by another drum solo. But why have a brief drum solo between two mellow, pretty piano pieces? It’s a strange choice, and breaks up the mood that seems to have been so carefully created. “Daydreams (Probably),” the CD’s title track, is the piano solo that follows the drum solo, and it’s another of the disc’s highlights. “Walking Meditation” is a relaxing and optimistic piano piece, something to soothe our troubled souls, which we have tremendous need for these days.

The second cover on this CD is Bob Dylan’s “Tomorrow Is A Long Time,” this track featuring Charlotte Durkee (Rick Cutler’s daughter) on vocals. This song has been covered by several artists over the years, including Elvis Presley and Judy Collins. Rick and Charlotte do a wonderful job with it, delivering a moving and sweet rendition that is another of this disc’s highlights. And actually, it’s followed by another favorite, “Opposites Distract.” Something about this track puts me at unease. I’m not sure exactly what it is, but while listening to it I’m prepared for despair or disaster to come in through the window.

The final of this disc’s covers is an interesting rendition of Wayne Shorter’s “Sanctuary,” a tune included on the Miles Davis record Bitches Brew, an album that of course features Chick Corea. Rick starts this one off with some strange sounds, the only of the CD’s tracks to use effects like that, and then suddenly we’re eased into the composition’s beauty, but with those effects persisting in the background (and foreground, for that matter). Rick Cutler, in addition to piano and drums, plays saxophone on this track. And why not? After all, it was composed by Wayne Shorter.

Another of my favorites is “Back & Forth Forever,” which does have an odd, haunting, eternal quality, a weird purgatory for children and other lost souls. Like a long empty hallway, with giant windows on one side, curtains blowing in as you keep moving along, hoping for something at the end, hoping for an end. This CD concludes with a lighthearted piano piece, “Purple People.”