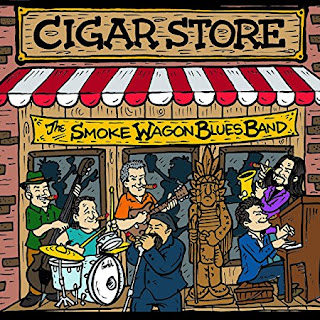 The Smoke Wagon Blues Band has been playing for more than two decades, and you can hear the experience, as well as the joy they take in playing, in the tracks of their latest release, Cigar Store. This disc contains some fun tunes, as well as some more serious blues. The band is made up of Corey Lueck on vocals and harmonica; Mike Stubbs on guitar, dobro and backing vocals; Nick Succi on piano, organ and backing vocals; Gordon Aeichele on saxophone; Jason Colavecchia on bass and backing vocals; Steve Sherman on percussion, organ, bass and backing vocals; and Tibor Lukacs on drums and backing vocals. They are based in Hamilton, Ontario (so much good music comes out of Ontario). Most of the tracks on this CD are originals. And you know they mean every word they say, like when they sing, “I hate to see you leave, baby, but I love, I love to watch you go.”

The Smoke Wagon Blues Band kicks off Cigar Store with “Walking Cane,” a lively tune about having the blues again. Hey, what else? It is the instrumental section of this song that is especially enjoyable. I love that bass line, and check out that organ and the saxophone! That there is some delicious bit of playing with something of a timeless quality designed to raise your spirits. It’s followed by another lively number, “Must’ve Read It Wrong,” which begins with some great blasts on the harmonica, then relaxes a bit into a good groove. This is a playful song with humorous lines like “I had to run before I learned to crawl/Learned all I know from a bathroom stall/I must’ve read it wrong” and “I’m going to yodel in the valley/Until the cows come home,” the latter obviously a fun reference to cunnilingus. And I love when the others echo him at the end, “Yodel in the valley.” This tune is a delight.

“I Tried” is a mellower tune about how it’s difficult to follow the advice given to him by his friend, about not letting a woman take his soul. “And I tried, oh lord I tried, honest I did.” There is something incredibly appealing about this song, in the honesty of the vocals, in the old, familiar, delightful sound of the guitar, and in the saxophone becoming powerful at just the right moments, then trailing off also at the right moments. At times, this song has the feel of something by Sam Cooke or Otis Redding. Yeah, it’s that good.

Things start swinging with “Directly Under Her Thumb,” a song written by Corey Lueck and Mike Stubbs. There is joy in the music, even as Corey sings, “My friends call her ball and chain.” Oh yes, they both know who is in charge in that relationship. And certainly there is some pleasure to be had knowing your woman is in control; thus, the upbeat, happy feel of the music. I particularly like the work on keys. That’s followed by the album’s title track, “Cigar Store,” which begins with the piano and some spoken word, the sax then singing to back him up. “Strange things happen under the midnight sun/When a man gets lonely, he might come undone.” Then after a minute and a half or so, the song kicks in, swinging and jiving, and it becomes a fun number. And I dig that brief lead on bass.

“Set Me Free” is a song that was originally released on the band’s The One And Only Smoke Wagon Blues Band album more than a decade ago. This one has a steady, simply groove, letting the serious and passionate vocals drive the song and take focus. And then halfway through the song, the sax comes in as another voice, expressing perhaps what can’t be spoken. That’s followed by “Mean Old Lady,” one of only two covers on this CD. It was written by Richard Newell. They close the album with the other cover, “You’ve Been A Good Old Wagon,” written by Ben Harney and Johnny Biller. This is another of the CD’s highlights, with its delicious old ragtime vibe. The way they handle it reminds me just a bit of Dr. John. It’s a fun way to end the album.