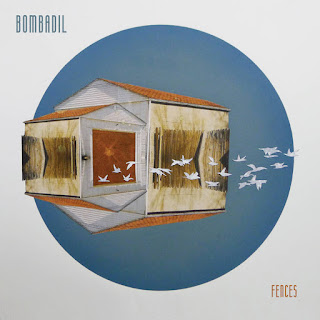 Yes, I first became curious about Bombadil because of the band’s name, I admit it. I’m a fan of the Lord Of The Rings books (and films, even though that character was cut from them). The first album of theirs that I heard was 2013’s Metrics Of Affection, and I became a fan of the band immediately, enjoying their catchy blend of pop and folk, and particularly their vocals. The band has gone through some changes since then. Bryan Rahija left the band, and then, after their 2015 release, Hold On, Stuart Robinson also left. Later that year, Stacy Harden joined, and so the band now consists of James Phillips, Daniel Michalak and Stacy Harden. As perhaps a result of these changes, the band’s new release, Fences, has something of a different sound, though this is also a result of the different approach the band took to this material. Also, Bryan Rahija returned to play guitar on this release. There is a sweeter, pretty folk feel to much of this material, a sound that I love. All tracks on this CD are originals.

The CD opens with “What’s So Great About You.” I can’t help but think this song is about Donald Trump. Perhaps I’m reading something into it that isn’t there, but the lyrics certainly fit. Here are the first several lines: “The thing about you/Only you think you’re special/What’s a person to do/When there’s no room on the pedestal/What’s so great about you.” There is a soft beauty to this song, and the harmonies rise gloriously above the instruments at moments. That’s followed by “Not Those Kind Of People,” which reminds me a bit of Cat Stevens, particularly in the vocal line. And check out these lyrics: “And if you looked in our basket/We’ve got hate that’s just fantastic/Funny how well we’ve masked it/Living so long/And even if we were/Bred for jubilation/Like a peacock in fur/I believe/We’ve been led to temptation/Washed down the river/And hooked on the lure.” There is a strange joy in the approach, and even hand-claps, helping make this one of my favorite tracks.

Even though this album has more of a folk feel, it certainly does not feel like anything traditional. This band continues to create its own way, its own sound, delivering songs with its own particular perspective. And even with the changes in the band’s lineup, that is something that remains constant. Take “Binoculars,” for example (though, really, you could take any of these tracks as an example), with its deceptively simple folk sound on acoustic guitar at the beginning. The vocal line also begins with an easy, direct sound. But then the harmonies come in, and the song is taken to a different level. “I raise up my binoculars/And I see everything everywhere/I see detail, of that I’m sure/But I don’t see me/And that hurts/The most.” And you realize that the song has completely pulled you in, immersed you in its beautiful vocals, in its world. And this band is able to do that with every damn song. It’s remarkable.

“Perfect” seems the perfect song for Valentine’s Day, a sweet tune that looks forward to a long life together, but still with the band’s delightfully quirky vibe. Take these lines, for example: “What would be the name of our first kid?/I know you like Emma Jean, but I can’t stand it.”  Here are the song’s opening lines: “What would be the color of our first house/Would we have two bedrooms if we can’t work it out.” Yes, it is a love song, a song that is making me feel pretty good. “And I would kiss you/And you would like that/And you said/And you said/You said everything was perfect.”

That’s followed by a different sort of relationship song, “Fence.” Check out these lines: “I am a fence/In your back yard/Why is it so hard/And it’s hardly love/If I can’t let you run/Down to the gate/The latch is undone.” “I Could Make You So Happy” also reminds me a bit of Cat Stevens at the beginning. This is another sweet song. Here is a taste of the lyrics: “Oh, I tried to let you let yourself go, but then my arms won’t let you/Oh, I tried to hold you hold yourself up, but then my arms always caught you/Let’s put our fingers in our fingers and oh my what are those brown eyes that look back at me/If I’m a singer you’re a singer, we’re a duet of those low and highs that make harmony/I could make you so happy.” And that one is followed by “Long Life,” which is incredibly pretty and sweet. This actually might be my favorite track on this CD, in part because lines like these hit me so hard and bring me to tears: “So I hope you can believe in me even though it’s gotten so damn hard/To be counting down the days until we get to wake up in each other’s arms/I’m hoping for a long life/Yeah, a long life/A long life for you and me.”

CD Track List
Fences is scheduled to be released on March 3, 2017 on Ramseur Records.
Posted by Michael Doherty at 7:23 PM