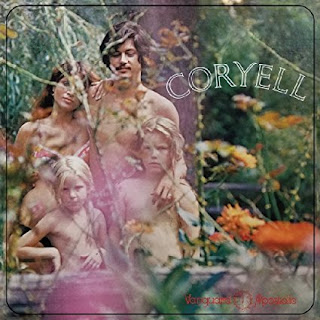 From my very early childhood, I was interested in 1960s music. And as I got into my teens, I got into the spirit of the late 1960s culture – not just the music, but the writings and the protests and the attitudes. I was particularly drawn to Abbie Hoffman (we were both born in the same city, after all) and the Yippies. I appreciated their sense of humor about the whole thing, and I felt I had been born too late, that I would have enjoyed some of the late 1960s madness. Now, as it seems a true revolution will be the only thing to put a stop to the current madness of the Donald Trump regime, I may get a chance to find out. And it’s a terrifying prospect. Yet, as I asked my girlfriend: Which is more frightening, a violent revolution or no revolution at all?

Well, another friend reminded me today that music will get us through whatever comes. And today I’m turning to some late 1960s music by Larry Coryell. Even though I’ve listened to a lot of music from this period, somehow I hadn’t heard these recordings. Coryell, his second album, was not available on CD until now. It contains a few instrumental pieces, with some good jams, driven by Larry Coryell’s work on guitar. He is joined by Bernard Purdie on drums, Albert Stinson on bass, Ron Carter on bass, Chuck Rainey on bass, Mike Mandel on organ and piano, and Jim Pepper on flute. This CD issue contains new liner notes by Bill Kopp, including quotes from an interview with Larry Coryell.

Near the beginning of the opening track, “Sex,” Larry Coryell repeatedly shouts, “Sex!” In the liner notes, Larry explains that the song came about as a response to a shout by an elderly woman at an anti-war protest. “Sex! That’s all you people are interested in,” the woman yelled at the protestors. “Sex! Sex! Sex! Got to have it.” The song then develops into a pretty good jazz rock jam, with Chuck Rainey on bass. It’s followed by “Beautiful Woman,” which has a mellower, sweeter vibe. “Beautiful woman, sensitive woman/Nothing can change you from being the way you are.” Larry Coryell plays piano as well as guitar on this track. Ron Carter delivers that great bass line.

Things then get cooking with “The Jam With Albert,” an instrumental jam with Albert Stinson on bass. This heavier, rocking number has a definite late 1960s feel, with its blues influence and good, steady groove. And Larry Coryell is able to cut loose here, particularly as the tune is more than nine minutes long. Here is one you can really sink your teeth into, and let loose yourself. Turn it up, shout, dance, throw things if you must, let off some steam. “The Jam With Albert” is followed by another of my favorites, “Elementary Guitar Solo #5,” which begins with a guitar solo that, as mentioned in the liner notes, is actually based on a piece by Bach. And when the tune kicks in, it takes on familiar vibe (reminding me a bit of “Stop That Train” for a few moments), with also a bit of country rock flavor to the funky jam. Man, I love that guitar. It then ends as it began.

Julie Coryell, Larry’s wife at the time, wrote the music for “No One Really Knows,” with Larry contributing the lyrics. There is a humorous account of how the writing of this song happened in the CD’s liner notes. “Open up the gates to insanity and vanity.” Yup, I think that was done. Larry and Julie also co-wrote the album’s closing number, “Ah Wuv Ooh,” a tune emerging from baby talk after the birth of their son. “Morning Sickness” is a cool, funky instrumental tune, a jam that is another of the disc’s highlights.

CD Track List
Coryell was released on CD on February 3, 2017 through Real Gone Music.
Posted by Michael Doherty at 1:17 PM