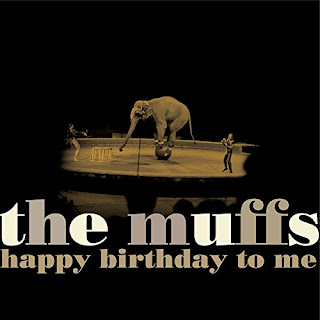 Is it possible to kill Donald Trump with music? Has anyone tried blasting The Muffs’ “That Awful Man” at him? I think it’s worth looking into. And Omnivore is re-issuing Happy Birthday To Me, which contains that track, so it’s the perfect time to try it. Actually, it’s coming out just before my birthday, so there. Of course, the title always reminds me of that early 1980s horror movie. This album was originally released in 1997. I can’t believe it’s been twenty years. I think I graduated from college right around the date this album was originally released, and maybe it was playing as we got our diplomas. Seems about right. As with Omnivore’s re-issues of the band’s first two albums, this CD contains several bonus tracks, most of which were previously unreleased. There are also new liner notes by all three band members, with thoughts and recollections of the making of this album, including the anecdote surrounding the CD’s title (it has nothing to do with the 1981 horror film). Now that I think about it, I suppose it makes more sense to play “That Awful Man” for Melania Trump. Well, good luck to anyone who tries it anyway. Something’s bound to give.

This album kicks off with “Crush Me,” written by Kim Shattuck. Actually, all the tracks on the original album were written by Kim. And she writes some good lyrics, like these lines: “I want your love and confusion/Crush Me” and “Trust me/When I tell you/My scent is still fresh and it's on you.” That’s followed by “That Awful Man,” and these lines seem appropriate to the couple currently occupying the White House: “And he doesn't mean it when he says he loves you so/Dedicated to himself as if you didn't know.” Though, actually, has he ever told Melania that he loves her? Who knows? And is she even in the White House, or hiding away in New York? Okay, enough about that.

One of my personal favorites from this album is “All Blue Baby,” in which Kim sings, “And you're ugly through and through/And you think you're ugly too/And I see what you see/And it's so right on/It's a crummy, crummy day.” This one is just really working for me right now. Maybe it’s because I’ve basically been in a foul mood since the election, and things are just getting worse out there, and this groove is helping. I am especially thankful these days that bands like The Muffs exist. This album deserves some volume.

Kim’s sister Kristen Shattuck provides backing vocals on “Is It All Okay?” Bugger, things keep making me think about the mendacious so-called president. Check out these lines: “You think you're great, boy/But now it makes me sick to think/About the words you spoke/Through your old wicked face.” That’s followed by another of my favorites, “Pennywhore.” I love this song, especially its sense of play. It’s just absolutely bloody fun. A demo of this song was included on last year’s expanded edition of the band’s second album, Blonder And Blonder.

This entire album is pretty damn good, but another track that stands out for me is “Nothing.” It’s one I want to dance around to, knocking things over, tearing fistfuls of hair and skin from the couch. “I believed you baby/I don't know why/I believed you baby/Now I know.” Oh man, I love those shouts. Another great shout opens “Keep Holding Me,” which is also a fun tune. This one makes me happy. The original album then concludes with “The Best Time Around,” which has more of a strong pop feel. But check out these lines: “And I will wish upon a star/To fall upon your head/If you should die before I wake/I pray the lord your soul will bake.”  Well, actually, there is an untitled hidden track after that song, after about ten seconds of silence. It’s a goofy improvised tune, with Ronnie on drums instead of Roy (both Ronnie and Kim talk about this tune in the liner notes). “New jazz, Daddy-o.”

This special re-issue contains seven bonus tracks, most of which were previously unreleased. Actually, the first of the bonus tracks is the only one that was available earlier. “Pacer” was released as the flip side to the “I’m A Dick” single, and also included on a couple of compilations. This song was not written by Kim Shattuck, but by Kim Deal, and originally recorded by The Amps. The other six tracks are demos of songs from this album – “Till You Walk Away (Crush Me),” “That Awful Man,” “Honeymoon,” “My Crazy Afternoon,” “Outer Space” and “The Best Time Around.” This version of “That Awful Man” has something of a 1960s thing happening, which I love.

CD Track List
This special expanded edition of Happy Birthday To Me is scheduled to be released on March 3, 2017 through Omnivore Recordings.
Posted by Michael Doherty at 12:10 AM