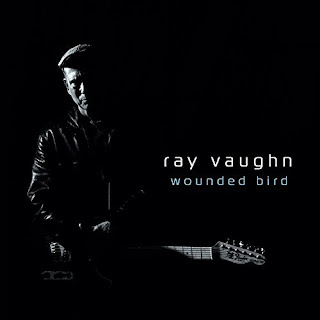 In the late 1970s, Ray Vaughn founded the San Francisco punk rock band Hostages. He performed in that band and others in the San Francisco scene until the early 1990s. And then…? I don’t know. But Ray Vaughn returned to the music scene in 2013 with Way Down Low, and then late last year followed that with Wounded Bird. This album begins with punk and rock, delivered with energy and a snarl, and yet ends with a beautiful song more in the folk realm. Regardless of the energy, regardless of the volume, these songs all come across as honest, passionate, real. Most of the songs on this disc are originals. Joining Ray Vaughn on this album are Ed Rawlings on electric guitar, James DePrato on guitar and mandolin, Kevin T. White on bass, and Prairie Prince (yes, of The Tubes) on drums.

The album opens with “Human Calculator,” which has something of a pop vibe somewhere in there, but with a punk heart pumping its energy to our ears. There are some deliciously biting lyrics, with lines like “You throw a look in my direction/What you see is your reflection” and “I see your heart is full of want” and “You’re living like an open book/That one that no one read/Or even took a look.” It’s a great way to start the album. Phil Bennett (of Starship) plays Hammond B3 on this track. That’s followed by the CD’s title track, “Wounded Bird,” which comes on strong and fast. This one too has some damn good lyrics. “How do you rise above it when you’re so tired of it/How can you say you love me when you can’t stare me in the eye.” Man, the energy of this song fits perfectly with my mood – kind of angry, kind of ready to burst, but still (just barely) contained within a groove. I love his vocal delivery here.

That’s followed by the CD’s one cover song, a rendition of New Order’s “True Faith.” Ray Vaughn’s version is a bit less pop, a bit more rock, a bit more raw. And I like it. Ray Vaughn then goes in a different direction with “Change In Latitude,” a mellower tune, with country elements, and a somewhat haunted sound, like he’s walking toward an uncertain horizon. However, there is something strangely positive about this song. After all, its main lines are, “Love is written everywhere you move/It just might be the change in latitude.”

My favorite song on this disc is probably “Song For You.” There is something incredibly pretty and moving about this one. “And I can only hope for so long/That I lived a good life, right or wrong/You know I am kind and you know I am true/Here’s to you.” He is vulnerable, in a way, but still with a power, a strong heart. The song builds in force halfway through, and is really emotionally engaging. This is a song that affects me more each time I listen to it. I definitely recommend checking it out. Ray Vaughn concludes the disc with another pretty song, “It Happened On Willow Street,” which he presents on guitar and vocals, giving it an immediate and intimate feel. “It started as a spark on Willow Street/But it’s so hard to leave behind/Life, love, your words so kind/But I’m standing strong at the city’s feet.”

CD Track List
Wounded Bird was released on November 4, 2016.
Posted by Michael Doherty at 12:04 AM