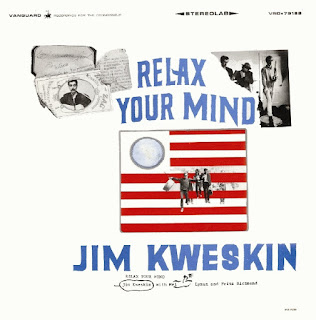 I’ve been sick for the past several days, like a lot of folks. Some friends have suggested that Donald Trump is at fault. It was meant sort of as a joke, but there is some truth to it. The stress, anger, despair and hatred we all feel can’t help but have a physical effect on us. The whole nation is sick, and the healing might not come for four years. But in the meantime we can at least combat the symptoms. Today’s drug of choice is Jim Kweskin’s Relax Your Mind, originally released in 1965 and now available on CD through Real Gone Music. Yes, some great fun folk music is just what the doctor would have ordered had I gone to see one.

The album has something of a relaxed, intimate, immediate feel, like the band has stopped by to play in your living room, and you can join in if the mood strikes you. The band, by the way, is Jim Kweskin on vocals and guitar, Mel Lyman on harmonica and Fritz Richmond on washtub bass. It’s Jim’s first album without the full Jug Band (which included Geoff Muldaur and Maria Muldaur) backing him. This CD issue includes new liner notes by Richie Unterberger, as well as the original liner notes by Mel Lyman.

Jim Kweskin kicks off the album with a medley of songs from the ragtime era, beginning with “I Wish I Could Shimmy Like My Sister Kate.” This is a whole lot of fun, the perfect antidote to the current ills of the country. “I may be late, but I’ll be up-to-date/When I can shimmy like my sister Kate.” That leads straight into “Heebie Jeebies,” a song most famously recorded by Louis Armstrong in the 1920s. The line that always makes me smile is “Well, I’ve got the heebies, I mean the jeebies.” That leads to “Fifteen Cents.” Jim Kweskin follows that with “Hannah,” a very cool, kind of bluesy folk tune. I love his vocal approach as he pleads, “Oh, Hannah, Hannah/Hannah, won’t you open that door/Hannah, Hannah won’t you change your manner?” Bloody great! And why won’t she open the door? “Let me in please/Honest, I’ll freeze/I’ll catch the grippe again/And I’m starting to sneeze.”

“The Cuckoo” is a song that was covered a lot at the time of this album’s original release. Big Brother And The Holding Company did a great rendition under the title “Coo Coo,” releasing it as a single (and on the re-issue of their first album). This version by Jim Kweskin has a mellower, serious vibe, with some wonderful work on harmonica. It’s almost like a duet with the harmonica, with it echoing and responding to Jim’s vocal line. This is one of my favorite tracks. There are a lot of different verses to this song, but I don’t recall hearing these lines before: “Sometimes I wonder what makes women love men/And sometimes I wonder what makes men love them.” (But I’m sick, and my brain isn’t functioning quite right, so perhaps I’ve heard those lines many times. Who knows?)

Marilyn Kweskin joins Jim on lead vocals for “I Ain’t Never Been Satisfied,” which, according to the liner notes, features lyrics written by Jim and Marilyn. This is a strange one, with a serious feel on guitar, but with lyrics that are kind of playful, such as these: “Been to the river, been baptized/That didn’t make me satisfied” and “Old Uncle Rabbit/Got a mighty habit/Jumping in my garden/Eating all my cabbage/My red tomatoes/My sweet potatoes.”

This CD features two live tracks, recorded at Club 47 (now known as Club Passim) in Cambridge, Massachusetts. Originally, this was going to be a live album, but Jim didn’t think it was good enough, and kept only these two tracks. (The live album would eventually be released anyway, to Jim’s displeasure.) The first of the two live numbers is “I Got Mine,” a song that Frank Stokes recorded in the late 1920s, and was also recorded by Pink Anderson. In introducing it, Jim says: “A song called ‘I Got Mine.’ I hope you got yours,” which gets a laugh from the audience. And it’s a fun, playful number. It’s followed by the other live track, “Buffalo Skinners,” which has a much more somber tone.

“Guabi Guabi” begins as a relaxed, pretty guitar instrumental. The vocals come in a third of the way into the song, and Fritz Richmond shares vocal duties with Jim Kweskin. The album concludes with its title track, “Relax Your Mind.” This is a wonderful, kind of slow version. “Relax your mind, relax your mind/Make you feel so fine sometimes/Sometimes you got to relax your mind.” Not bad advice.

CD Track List
Relax Your Mind was released on February 3, 2017 through Real Gone Music.
Posted by Michael Doherty at 2:13 PM