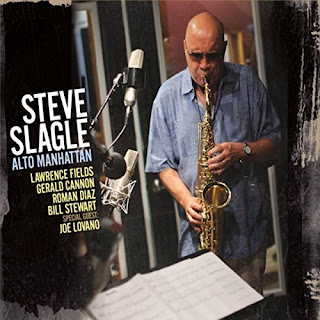 Saxophonist Steve Slagle’s new album, Alto Manhattan, provides some lively jazz to elevate your mood. It certainly had that effect on me, and just when I was about ready to give in to anger and despair (most of us are on the edge these days, since the bloody election). This CD, which follows 2015’s The Power Of Two, features mostly original material, and on a couple of tracks Steve switches to flute. He is joined by Lawrence Fields on piano, Gerald Cannon on bass and Bill Stewart on drums. Joe Lovano and Roman Diaz join the band on certain tracks, on tenor saxophone and congas respectively.

Steve Slagle kicks off the CD with “Family,” an original composition with a delicious rhythm. This is one of the tracks featuring Roman Diaz on congas. It also features Joe Lovano on tenor saxophone, and so we are treated to two saxophones right at the start of this album. There is also some nice work on piano by Lawrence Fields. There is just a tremendously bright energy to this track that enveloped me. It’s followed by “Alto Manhattan,” the CD’s title track, with some great work on drums providing a fast-moving ship, above which Steve Slagle’s horn plays to the wind, the skies, affecting them just as his playing affects us, getting everything flying along. This is great stuff to carry us swiftly away from our troubles.

“I Know That You Know” has a sexier, more romantic and bluesy feel, but isn’t too slow. Steve Slagle’s saxophone sings here, having a lot to convey. And then there is some wonderful work on piano that makes me smile. Oh yes, things are good, even before we get that cool lead on bass by Gerald Cannon. And then we’re treated to a five-minute solo saxophone rendition of Johnny Green’s “Body And Soul,” the first of three covers, which are presented all in a row. Steve takes it to some interesting places, before then getting nice and gentle and low at the end. The pace picks up again with an excellent cover of McCoy Tyner’s “Inception.” Things get pretty wild at one point, like the horn and drums are challenging each other. And toward the end there is a brief drum solo. The third of the three covers on this album is a pretty rendition of “Guess I’ll Hang My Tears Out To Dry,” a song written by Jule Styne and Sammy Cahn, and featuring some tender playing by Steve Slagle and Lawrence Fields.

Joe Lovano then joins the group again on tenor saxophone for “(Alto Manhattan) A.M.,” a different version of the album’s title track. And again, it moves along at a rapid pace. Try to keep up if you can. Light your feet on fire and dance straight through your walls like a joyful cartoon animal, or just sit down and let it take your imagination on a ride. There are some great short drum solos toward the end. For the last two tracks of the CD, Steve Slagle puts down his sax and switches to flute. The first, “Holiday,” is a somewhat mellower tune featuring Joe Lovano on G mezzo soprano saxophone. “Viva La Famalia” has a great groove. Both tracks feature Roman Diaz on congas.