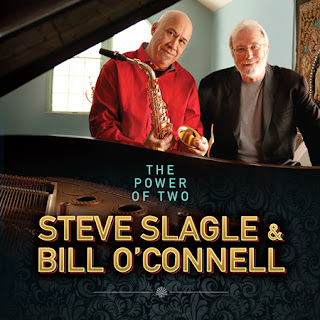 Saxophonist Steve Slagle and pianist Bill O’Connell have worked together on several projects, but until The Power Of Two they hadn’t worked as just a duo. This CD features mostly original material, including a tribute to pianist Kenny Drew, Jr., who died in the summer of 2014 (these tracks were actually recorded soon after that, on September 12, 2014). There are also a few well-chosen covers, including material by Bill Evans and Dave Brubeck. The liner notes are by Jack Zulack, executive producer at Panama Records.

The album opens with “Good News,” composed by Steve Slagle. This is an interesting and kind of loose tune that has a playful vibe which I like. There is a nice piano solo halfway through, which maintains that loose, fun feeling and attitude. It’s followed by “One Life,” also written by Steve Slagle, which begins with some cool work on keys. And when Slagle comes in on saxophone, the tune takes on an intimate and sweet vibe. And again, there is definitely a loose feel to the tune, which gives the music an immediacy. I love what Steve Slagle does on sax, particularly toward the end. Even though this is one of the longer tracks, I wish it were even longer, as I like what they’re doing as it fades out.

Steve Slagle then switches to flute for “Peri’s Scope,” the first of the album’s covers. This was written by Bill Evans, and so it’s interesting that it’s the flute and not the piano which begins the track and really leads the direction of the tune. It isn’t until halfway through that Bill O’Connell solos on piano. That is followed by another cover, “I’ll Wait And Pray,” written by Jerry Valentine and George Treadwell, and perhaps most famously recorded by John Coltrane for his 1961 LP Coltrane Jazz. This wonderful version by Steve Slagle and Bill O’Connell has a gentle beauty. They also cover Dave Brubeck’s “The Duke,” which was a tribute to Duke Ellington written fairly early in Dave Brubeck’s career. Steve Slagle plays flute on this track, which for me is another of the disc’s highlights. The CD’s final cover is Miles Davis’ “Circles,” which was on his Miles Smiles LP.

“A New Day” has such a positive, happy tone, and right from the start it had me smiling. This one was written by Bill O’Connell. “KD Jr.” is the CD’s tribute to pianist Kenny Drew, Jr.  It was written by Steve Slagle, who had played and recorded with Kenny Drew, Jr. And it was this composition that began the project that resulted in this CD. There is something sweet and beautiful about this track, and I love Slagle’s expressive playing on saxophone. Surprisingly, there is a vocal toward the end, “Talking about Kenny Drew.” Drew was only fifty-six at the time of his death.

CD Track List
The Power Of Two was released on March 23, 2015 on Panama Records.
Posted by Michael Doherty at 9:24 PM