Frank Zappa And The Mothers Of Invention: The Lost Broadcast: The Full Performance DVD Review 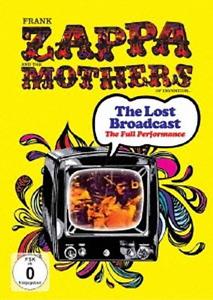 I first became aware of Frank Zappa through The Monkees. He appeared in an episode of the television series, where he is dressed as Mike Nesmith and Mike is dressed as him, and they tease each other (it’s one of the series’ funniest segments). That episode aired in 1968, and later that year Zappa also appeared in The Monkees movie, Head (one of my personal favorite films). That same year, Frank Zappa And The Mothers Of Invention filmed a band rehearsal at the Beat Club in Bremen, Germany, a portion of which aired on German television a couple of years later. And now that full performance is available on DVD as The Lost Broadcast. It is approximately 79 minutes, and it is in black and white. The DVD also allows you to watch just the original broadcast, which is approximately 32 minutes (and is the last section of the full performance).

There is a caveat at the beginning, mentioning that the footage “contains some sound dropouts and imbalances.” And yes, the sound does cut out at moments. It’s annoying, sure, but it’s definitely worth dealing with these imperfections because the footage is so worthwhile. The footage includes the band tuning up at the beginning. After a bit of high-pitched feedback, Frank Zappa says, “Sounds great.” Before they can get going, however, a tray of food is wheeled in, and the band fools around with the grapes. But soon the warm-up becomes a jam, and there’s even a cool drum solo before too long. And it’s great watching Frank conducting the band with his hand signals. That’s interesting because it shows that even in what seems like a completely improvised moment, Frank is really in control.

That being said, this performance has a relaxed, loose, fun vibe and atmosphere. At one point, Frank introduces Don Preston, the man on keys, who then tells us about his problem: “It’s those nurses, they make me sleepy.” And another band member begins recounting the problems with his nose: “Maybe something bit me while I was sleeping.” And out come the toys. Watch the teddy bear getting it on with a doll. Yeah, even though it’s a rehearsal, there are some odd theatrics, including a makeup artist applying makeup to one of the guys while the rest play.

There are a lot of cool, jazzy moments in this performance. Zappa’s famous Uncle Meat record would be released in the spring of the following year, and much of this rehearsal is material from that album. Also here is a version of “Prelude To The Afternoon Of A Sexually Aroused Gas Mask,” a tune that would be included on the 1970 album Weasels Ripped My Flesh (hell, even if for some reason you don’t like Zappa, you certainly have to appreciate his titles). The tunes here are basically, largely instrumental pieces. It ends with a kind of sweet-sounding instrumental rendition of “Let’s Make The Water Turn Black,” a song from We’re Only In It For The Money.

The DVD is divided into only two chapters, not by song. And interestingly, the original broadcast version contains no opening or closing credits. The full version doesn’t either, but I didn’t really expect it to. Frank Zappa And The Mothers Of Invention: The Lost Broadcast was released on DVD on December 18, 2015. There are no special features.
Posted by Michael Doherty at 5:04 PM