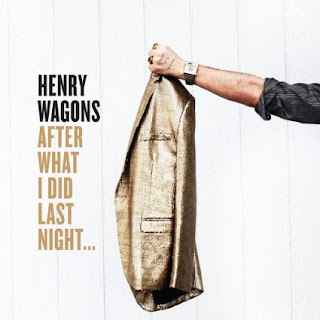 I got turned on to the Australian band Wagons in 2011 with the release of Rumble, Shake And Tumble, which I consider one of the best albums of the decade (if you haven’t heard it yet, I highly recommend picking up a copy). Henry’s voice and his songwriting are two big parts of what makes that band so special, and so I was excited in 2013 when Expecting Company? (his solo EP) was released. That EP confirmed for me that this guy is the real deal, a serious talent, and I knew then that I’d want to hear everything he put out from then on. His new album, After What I Did Last Night…, is his first full-length solo album, and (as I expected) it’s fantastic, a total delight. All of the tracks are originals, written or co-written by Henry Wagons. Joining him on this album are Jerry Pentecost on drums, percussion and backing vocals; Richie Kirkpatrick on electric guitar, bass and backing vocals; Chris Altmann on bass, electric guitar, steel guitar and backing vocals; Skylar Wilson on keyboards, percussion and backing vocals (Wilson also produced the album); Josh Hedley on fiddle; and Cory Younts on harmonica. Quinn Devaux, Erin Rae McKaskle and Rayland Baxter provide harmony vocals. Interestingly, this CD was recorded in Nashville.

The album opens with “Cold Burger, Cold Fries,” a really good tune about a man whose apartment is not just devoid of good food but of the woman he wronged. “Cold burger, cold fries/Yes, it’s all I deserve/After what I did last night/I’m eating my just desserts.” My favorite lines, however, are these: “’Cause I know you’re a mess like me/And you must be a little bit hungry.” The song ends with a promise of trying to make it up to her. And I dig these lines from the following tune, “Weak Link”: “One thing you don’t know/About being the weak link, babe/Is that only I as the weak link/That can make the chain break.”

“King Hit” is a great, raw and mean-sounding tune, and is one of my personal favorites. If you enjoy Holly Golightly And The Brokeoffs and Tom Waits, you will fucking love this song. Pour yourself a drink and turn your stereo up. Here is a taste of the lyrics: “In walks little Janey, five feet five/Leopard print get-up, legs for miles/Whiskey on the rocks and a familiar smile/I say next thing’s next, my face is on the tiles/I’ve been king hit/On the back of my head.” And this is a man who “can’t help but think I might’ve deserved this.” Giving it an autobiographical feel, Henry makes this character a musician named Henry. Hell, maybe it really happened. Who knows? All I know is it makes a great tune.

“Head Or Heart” is a delightful country song about the question of whether to lead with one’s head or heart. There is a good humor to this tune, with lines like “She said I could have any girl in the room/Well, I ain’t ordinarily all that choosey/But the only girl I want in this room is you.” And the song’s last lines are hilarious. It’s followed by “Anything You Want,” another of the CD’s highlights. Of course “Anything You Want” can’t help but remind me of Leonard Cohen’s “I’m Your Man,” not so much in the sound, but in the lyrics and idea. And actually he sings, “I’m your man” a couple of times. “You want a snake, girl, I’ll charm it/If you need weed, I’ll farm it/If you want diamonds on that pretty little hand/Oh baby, I’m your man.”

“Cowboy In Krakow” is another wonderful and unusual tune, and I totally love those deep backing vocals. Ah, those wonderful adventures involving alcohol and women. “She came in the room, near six feet tall/Heels on the cobblestone/I was broken, under her spell/If I hung around this would not work out well.” And there is a delicious change toward the end, picking up the pace. I just love it.

“Long As I Breathe” is a sweet song about being a parent. It was co-written by Matthew Hassett, keyboardist in Wagons. “First kiss, heartache/Well into high school/Some days we try/And the pain never ends/When the world can’t stop you anymore/Just remember one thing/I’ll be there for you as long as I breathe.” There is also a song about being an only child, appropriately titled “Only Child,” and this is another favorite of mine. It has a sweet, intimate, honest feel. Here is a taste of the lyrics: “No older brother to teach me how to fight/No sister teaching me to treat women right/I was born on my own and I’ll die on my own/I feel a sense of loss now that I am grown/So please stay.”

CD Track List
After What I Did Last Night… is scheduled to be released on February 16, 2016 through Goldview and Metropolitan Groove Merchants.
Posted by Michael Doherty at 6:21 PM